Council to Look at Service Levels at Lakeview Cemetery 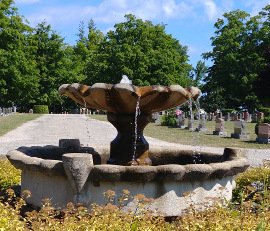 In response to a growing number of complaints received in recent months, at their June 24 meeting Meaford's council asked staff to prepare a report exploring service levels at Lakeview Cemetery.

Councillor Ross Kentner introduced a motion directing staff to prepare a report that will include options for service changes, including bringing lawn maintenance services in house. Kentner's motion received the full support of council.

Roughly a dozen concerned residents attended council on Monday in order to express their frustrations with what they say is a poorly maintained cemetery. Issues raised included long grass and lack of trimming around headstones, sunken burial plots, inoperable fountains, and a lack of staff presence at the cemetery.

One of the residents who spoke during public question period was Joan Grierson, who reminded council that she brought a petition to council in 2016 that was focused on the same concerns yet no action has been taken by the municipality to remedy the issues.

Meaford Treasurer Darcy Chapman told council that prior to amalgamation, Meaford had three full-time employees plus a summer student working at the cemetery, while today there is no full-time staff at the cemetery but instead municipal employees are cross-trained and able to carry out duties at the cemetery as needed, and for the past three years grass cutting has been conducted by independent contractors.

Chapman also noted that the rainy spring season this year, which has carried into the start of summer, has hampered grass-cutting efforts at the cemetery and all municipal properties.

While Lakeview Cemetery is the largest operated by the municipality, in total Meaford is responsible for the maintenance of two operating cemeteries along with 15 closed cemeteries.

With council's approval of Kentner's motion, staff will prepare a report outlining service level options to present to council at a future meeting.