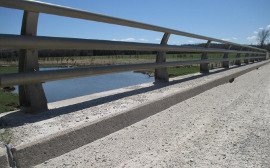 Meaford councillors received some good news at their April 8 meeting when they learned that the cost of the Shields Bridge rehabilitation, scheduled for this summer, will cost roughly $100,000 less than expected.

The nearly 50-year-old bridge, which spans the Bighead River on the 1st Concession in Bognor, was expected to cost a total of $623,600, however after bids had been submitted for the construction component of the project, the amended cost for the project including engineering and construction will be roughly $523,000. Council was told that the surplus funds will be placed in the bridges and culvert capital reserve at the end of the year.

At the April 8 meeting, council approved the award of tender to W.G. Kelly Construction. A total of eight bids were received. Work on the bridge will begin in May, and is expected to be completed by the end of August.

“The proposed rehabilitation requirements were established in the 2018 Ontario Structural Inspection Manual (OSIM) Report and includes the rehabilitation of the concrete on the bridge deck, bearing seats, abutments, and wing-walls, expansion joint conversion and guide block replacement, installation of roadside safety devices, and the waterproofing and paving of the bridge deck and approaches to extend the lifespan of the bridge and to continue to provide the desired levels of service for municipal bridges and culverts,” informed the report to council.

While the lower than expected cost was good news for council, staff also informed council of a potential issue that could delay the project – birds.

“Throughout the process we've been working with our consulting engineer to go through some of the risk factors for the construction schedule, and when they were doing the preliminary design last fall, they noticed that there was some nesting from swallows underneath the bridge,” Meaford's Manager of Purchasing and Asset Management, Bradey Carbert, told council.

Carbert told council that it will be important to get the project underway before the birds return to nest otherwise the project could be delayed for months.

“If the swallows move in and try to nest prior to May 1, we will have to postpone reconstruction of the bridge likely until after September,” Carbert told council, though he noted that mitigation steps will be taken in order to prevent the birds from returning to the bridge this season.

Council was pleased with the lower than anticipated bid on the project, and they are looking forward to getting the project underway.

In order to complete the rehabilitation project on schedule, the bridge will be fully closed. A detour route has been established and will be maintained throughout the construction period.