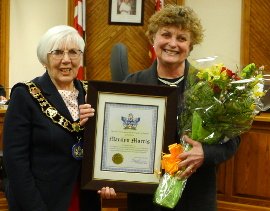 Earlier this year, Marilyn Morris announced that she was retiring from her position as Head Scarecrow, the organizer-in-chief of Meaford's annual Scarecrow Invasion & Family Festival. Morris had served as Head Scarecrow for 20 years, and at the March 11 council meeting, Morris was honoured by the mayor and council.

With the available seats in the council chamber gallery filled with Scarecrow volunteers, Mayor Barb Clumpus offered some thoughts on the now retired Head Scarecrow.

“There have been many eloquent, heart-felt words expressed which so totally capture Marilyn's spirit, her caring nature, and her immense capacity for organizing, recruiting, delegating, leading, supporting, and championing,” Clumpus told the gallery. “I want to take a moment to recognize all of that, and in addition, the impact on our community produced by the team she led. This team included her husband Richard, her executive team, and all the volunteers who helped consistently, brought so many smiles, and so many visitors to share in what Meaford has to offer. From recruiting new residents into their warm and friendly fold, to high achievement for six years now in the top 100 festivals and events in Ontario, to the June Callwood Outstanding Achievement Award for Voluntarism, recognizing leadership, innovation and creativity in community service. All of these have contributed to our welcoming, inclusive, and vibrant community.”

The mayor noted the many visitors from far and wide who make their way to Meaford each year to enjoy the unique festival.

“We know how far abroad the Scarecrow Invasion and Family Festival has reached from the names and home cities of visitors who have been touched by Mary Woods and her ambassador program. And from the comments left behind, we know that these visitors were delighted by the decorations and their experience here; all will remember Meaford and many have returned to visit again, perhaps even to build a life here. That has an economic impact that can be easily documented. Keeping any community event fresh and vibrant over time is truly a remarkable achievement, and it doesn't happen without all the tireless efforts of volunteers. We salute you all for your determination, creativity, and your commitment to promoting and supporting our community,” the mayor said.

Clumpus thanked Morris for her many years of dedication, and wished the new team and leader success in the years to come.

“Now as you move into your next chapter with Donna Earl leading the team, we thank you all and wish you continued success and much good fun. Marilyn, thank you from the bottom of our straw-filled hearts for all you have done for our community. We wish you and Richard much happiness and many new adventures in your future,” said the mayor, who presented Morris with a framed certificate and a bouquet of flowers.

After a round of applause, a visibly moved Morris offered thanks and some words for the event volunteers as they look toward the future. But before she began her comments, the former Head Scarecrow presented the two newly elected councillors, Ross Kentner and Paul Vickers, with their own kazoos, along with a short lesson.

“Those of you who know me well, know that I would rather be performing on a high wire across Niagara Falls, than be accepting recognition for something that is totally special to me, and that has been the recognition I have needed over the years. It's really easy to recognize as the mayor did me; it's really difficult to receive that same recognition. That said, I do wish to express my gratitude for it, and in particular to Mayor Barb for her kind and flattering words. I feel deeply humbled by the praise, and so proud of being the Head Scarecrow for 20 years,” said Morris. “I would also like to express my deepest appreciation to our municipality for your loyal sponsorship of the Scarecrow Invasion over the years, which I am sure will continue for many years to come.”

Morris said that she felt honoured and privileged to have served in the capacity of Head Scarecrow for two decades.

“To have served our community as Head Scarecrow probably has been one of the most satisfying roles I have ever played. In fact, I have always felt honoured and privileged to lead the charge. I would often sign off on correspondence with 'Proud Head Scarecrow' below my signature. Besides, what volunteer job can you have in this community where you can roam around in a scarecrow costume and straw hat tooting a kazoo – I mean, that alone is significant. However it's definitely not a job that can be done alone, so a few thank yous are in order.”

In order to stage such a large event, it takes more than just one person, and Morris has always placed the spotlight on the roughly 300 volunteers who help out each year, from building scarecrows, to decorating the town, to coordinating the many events that take place at the festival.

Morris offered thanks to many, beginning with her family.

“First and foremost to my family. Fortunately my kids and grandsons bought in, knowing that I'm slightly weird. But it was my husband Richard, my partner in crime, and his truck as we all know and love, who was willing to further the cause with me from the get-go. That support has always been both necessary and deeply appreciated,” she said. “To my team, as stated in my final letter to you, there's an old song, 'Nobody Does it Better', and as far as I'm concerned, no one but you can do it better; that is, mount a hugely successful, award-winning event that benefits an entire municipality and county. You've done it with class, style, hard work, teamwork, and unbelievable professionalism. You've always been my dream team. Thank you for your faith in my leadership, and thank you for welcoming and embracing your new leader, Donna Earl. I have no doubt that under your combined leadership, the event's future is indeed secure.”

Before closing her remarks, Morris offered her thoughts on a frequently asked question – how has the Scarecrow Invasion & Family Festival managed to continue to grow after more than 20 years?

“Finally, I have been asked hundreds of times - 'Why do you think the Scarecrow Invasion has continued to grow and be successful year after year?' Quite simply, it was a great idea, it has grown incrementally and methodically, and you and the hundreds and hundreds of amazingly gifted Scarecrow Invasion volunteers, and you, the generous and committed event sponsors and donors, and you the tremendously supportive municipality, have together over time created a foolproof recipe for ongoing success,” Morris offered. “And as Barb mentioned earlier, the sixth year as a member of the top 100 festivals and events in Ontario, that's quite an accomplishment, and I've just been happy and deeply grateful to have been part of that team.”

Fighting off tears, Morris had one final comment before the council chamber erupted in applause.

“I'll end if I can, just by saying thanks for the memories.”