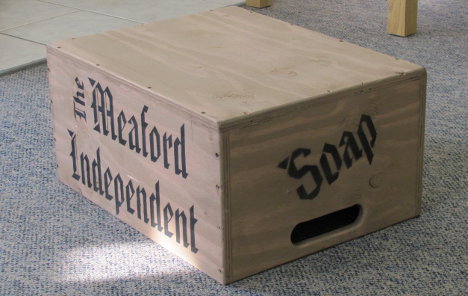 The final Meaford Independent Soap Box Saturday is upon us! Voting in Meaford's municipal election begins Friday October 17, and tomorrow for the fifth Saturday in a row, candidates will step up on the Soap Box to tell you why you should vote for them.

This Saturday we are bringing the Soap Box back to our office at the corner of Sykes and Nelson Streets. We advise those planning to attend to bundle up, and bring an umbrella just in case – you won't want to miss this Saturday's Soap Box event as we have at the time of publication, seven candidates wishing to participate.

Come on out and root for your favourite candidates, ask questions, and listen to the candidates as they share their visions for Meaford.

And if it is raining, let's have our own umbrella revolution at the corner of Sykes and Nelson!.

The old fashioned electioneering fun begins at 11 am, Saturday October 18. We look forward to seeing you there!