Cell Tower to be Relocated Away From School 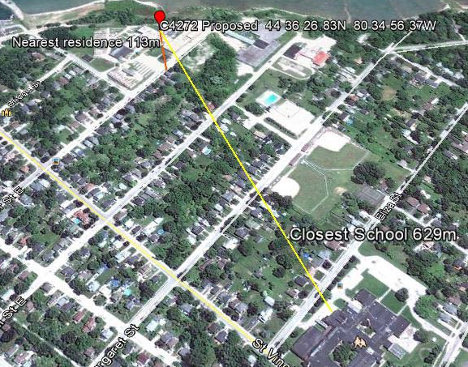 A proposed cell tower in close proximity to Georgian Bay Secondary School is to be relocated to another property according to a letter to council from Jeff McKay on behalf of Rogers Communications included in the agenda for the April 28 council meeting.

“On behalf of Rogers, we are now in a position to discuss results of the stipulated public consultation, currently underway in accordance with the governing federal tower-siting protocol,” wrote McKay in his letter to council. “We are further now prepared to propose a site relocation that we believe fully addresses the public concerns received to date, and we are asking for the Town’s assistance in a concurrence motion of support in order that the Proponent and the Town may bring this matter to a reasonable conclusion under the timing mandate of the federal undertaking, and in the interest of ending the current divisive public debate and protest.”

The original location proposed for the tower was on Edwin Street, a residential area that includes the high school. The newly proposed property is located at 226 Boucher Street, the site of the Stanley Knight hardwood flooring factory.

“The proposed tower would still be a monopole structure, but we have been able to reduce the height to 30m. The Civilian Oversight Committee was suggesting a 500 metre setback from schools. This site demonstrates 629 metres and thus satisfies the primary concern of the Support Council to Move the Tower campaign,” said McKay in his letter to council.

McKay also noted that at the Boucher Street location:

“We are aware that our municipality does not have a policy for cell tower placement under the new federal laws. We believe a policy on cell tower placement is of the utmost importance. I ask council to do two things. First, ensure that we develop a policy on cell tower placement within the Municipality of Meaford. Secondly, I ask council to ensure that our municipal staff require the developer of Rogers Site C4272, Meaford Town, to comply with the new federal policy and Meaford’s future adopted policy. Please allow the public a chance to express their concerns on this important issue,” Lewis asked of council on March 24.

After listening to the delegates, council responded quickly with a resolution at the ready.

The concerned residents quickly organized a rally outside Meaford Hall on March 27 in support of council's resolution, and a petition was started that at last count had collected more than 700 signatures.

“As you are aware, a Civilian Oversight Committee petition gained traction with the general public of Meaford. Despite the large scale of public involvement, there were no new issues of concern introduced as a result of this public involvement. We note that, in the industry, this has been the experience of carriers, and why the federal protocol has evolved to limit consultation such that it does not become onerous without benefit,” McKay told council in his letter. “With respect to the “Support Council to Move the Tower” petition, the core of citizens’ concerns relate to the perception of health risk in proximity to the Georgian Bay Secondary School facility. Unfounded allegations include misinformation such as the tower would be side-firing microwave into the school facility 24/7. The tower, in fact, broadcasts local signal using RF, of which microwave is a form, but not the frequency or technology deployed as it relates to the school. Microwave (“MW”) is a line-of-sight “beam” that is utilized for tower-to-tower communication where fibre does not yet exist; that points only at a distant tower dish target, and is neither present nor pointed at the school facility, nor does it disperse into the local environment.”

Attempts to reach members of the Meaford Cell Tower Steering Committee Wednesday evening for comment on the relocation were unsuccessful at the time of publication.