Council Says Goodbye to The Other Big Apple 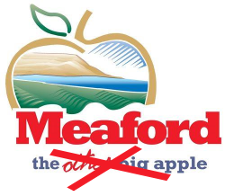 Some loved it, others loathed it, and Meaford's council voted to discontinue its use at their March 24 meeting.

Meaford will no longer be marketed as “The other Big Apple” after a 4 – 2 voted to discontinue the use of the slogan that was unanimously approved by council in March of 2011. Only councillors Deborah Young, and Lynda Stephens voted to keep the slogan.

In a report to council, Meaford CAO Denyse Morrissey said that many in the community have expressed reservations, or a dislike of the slogan which attempted to playfully compare Meaford to New York City.

“As part of the MEDS sessions held in late September 2013 and a consultation session held with municipal staff in July 2013, “The Other Big Apple” as the tag-line for the Municipality of Meaford was discussed. It had been communicated that a comparative marketing approach equating Meaford to New York City created confusion and did not foster an authentic understanding of what Meaford has to offer and our character or place,” wrote Morrissey. “The general feedback from the community consultation sessions in September 2013 indicated a strong preference for the discontinuation of the tag-line “The Other Big Apple”.

The process to re-brand Meaford began in 2010 when the services of a consultant were engaged to develop a new image for the municipality. That consultant spent a considerable amount of time over several weeks during the summer of 2010 visiting with local businesses, service clubs, and residents in general, to learn what made Meaford special, and to discover how those most intimately connected to Meaford viewed themselves and their community.

Two public input sessions were also held at Meaford Hall and Woodford Hall which allowed residents to offer their thoughts about how to market Meaford.

Branding concepts were then created and presented to council who then asked that another public input session be held to seek out community input about the designs that were proposed at the time.

“The Other Big Apple” was one of those concepts, and the consultant indicated that it was included at the request of then CAO Frank Miele who believed that it would be an effective marketing slogan for the municipality – though the option was dismissed by participants in the public input sessions.

The “Other Big Apple” option was also dismissed by council during a meeting in August of 2010. Councillors at that time instead focused on two slogans- “Shaped by the shore,” and “Rising above the bay.”

In the end, the former CAO's push to have Meaford marketed as “The other Big Apple” won the unanimous support of council. The cost of the branding exercise in 2010, and 2011 was approximately $5,000.

Having sparked controversy since its introduction, the slogan will now be phased out over the next 15 months.

“Our 2013 and 2014 promotions and advertising campaigns have focused on the theme “Set your sights on Meaford” and due to graphic design priorities, have not included “The Other Big Apple” in some promotions,” Morrissey told council. “The existing inventory of materials or products with “The Other Big Apple” would be phased out over time (3 – 15 months) and includes logos on vehicles, signage, stationary, business cards, and other promotional materials which will be replaced when inventories are depleted to minimize costs.”

Meaford's CAO anticipates costs of approximately $3,000 to phase out the use of the slogan, and potential costs associated with the development of a new slogan, though Meaford could also eliminate use of a slogan completely should council desire.

“The estimated cost for the evaluation, including the potential development of a new tag-line is $3,000. This will include the coordination and delivery of community consultation meetings by staff,” Morrissey advised council. “The estimated savings with the relocation of visitor services to Meaford Hall was $11,000. This project cost is recommended to be applied against these savings.