A second public meeting seeking input from Meaford residents about policing options for the municipality saw a similar response to the first such meeting held in Woodford on February 13 – stay with the OPP.

After a brief presentation at Meaford Hall on March 19 by Meaford CAO Denyse Morrissey, Mayor Francis Richardson turned the meeting over to the roughly 100 residents in attendance to ask questions, or express views.

While municipal staff have stressed the cost savings to be found by a switch to the Owen Sound Police Service – as much as $2.4 million over the five years of the OSPS proposal according to staff – those potential savings failed to impress the majority of the dozens of residents who spoke in support of remaining with the OPP.

OSPS Chief, Bill Sornberger along with Grey County OPP Detachment Commander Mike Guilfoyle fielded the bulk of questions from Meaford residents, and it was Chief Sornberger on the hot-seat for most of the evening defending the accuracy of the numbers provided in the Owen Sound proposal, and once again Sornberger repeated his assurance that the price quoted in the five year proposal would be all that is paid by Meaford even if actual costs exceed the quote from the OSPS. 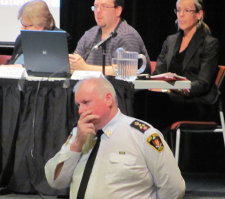 Throughout the night, amid hard questions about the likelihood of the OSPS proposal's accuracy over the full five year term of the proposal, Chief Sornberger was adamant that Meaford would see no additional costs other than what is quoted in the proposal, however his stance altered slightly when asked by Meaford Chamber of Commerce President, Shirley Keaveney how the OSPS could assure Meaford a guaranteed cost over five years when there are two large residential development projects on the horizon that could significantly increase Meaford's population and patrol area.

“Back to the five year fixed, promised cost, as you are probably aware, there are two major developments proposed in Meaford. One on the east, and one on the west, and these are really large developments. So I'm wondering should they happen, and we have to assume that at least one of them will, and could possibly draw 1,000 new families to Meaford. How can you then provide coverage for that added growth in Meaford with the numbers you have proposed,” asked Keaveney.

After expressing doubt that either project would be realized in the near future, Chief Sornberger conceded that such a circumstance could result in the need to renegotiate the agreement with Meaford.

“The proposal indicates staffing levels. Those staffing levels are only changed if the two councils negotiate it together,” responded the Chief. “So if it went up that drastically, and all of these things are happening, then there might be a renegotiation at that point. But without that, I can't just up that bill.”

Meaford Mayor Francis Richardson closed the two hour meeting with the assurance to residents that council is exploring all angles of the proposal, and are taking note of the views expressed by Meaford ratepayers.

“This is a decision that will not be made lightly,” offered Richardson.

The policing issue will be on the March 24 council meeting agenda.