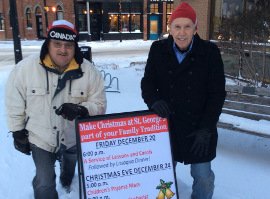 St. George’s, The Anglican Parish for The Blue Mountains, had just launched a campaign to promote their three special services on Christmas Eve when one of the sandwich board signs promoting the events was stolen from in front of the TD Bank in Thornbury.

“The bank had given us permission to place the sign on their property and the 'single event' provisions of the Town’s Sign By-law allowed the sign,” reported John Hethrington, a member of St. George’s Parish Council. “So, we are dumbfounded as to why the sign was taken.”

John White, also on Parish Council, filed a report with the OPP and arranged a replacement sign. The sign promoted a 5 o’clock Pyjama Mass at St. George’s for families to bring their children to celebrate the birth of Jesus. It also promoted a sing-along coral Eucharist at 7 pm and a Candlelight Communion Service at 9 pm. Everyone in the Blue Mountains is invited to attend.

“We can’t imagine who would have taken the sign,” continued Hethrington. “We are concerned about the other signs: on Marsh Street by the Church, in front of Foodland, at the Circle K store in Craigleith and in the Blue Mountain Village. Riverside Graphics quickly produced a replacement sign for the TD Bank location, but we would like the stolen sign returned to the Church, no questions asked. After all, it’s the season for forgiveness.”

Photo: John Hethrington (right) and John White from St. George’s Anglican replace the sign promoting the three special Christmas Eve services at the church, which was stolen on Monday from in front of the TD Bank in Thornbury.