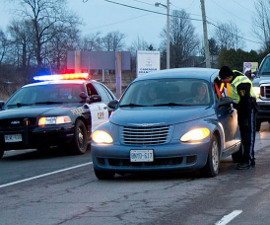 Heading into the first Festive RIDE campaign since the legalization of non-medical cannabis, the Ontario Provincial Police (OPP) reminds drivers that they are as prepared to deal with drug-impaired drivers over the holidays as those who are alcohol-impaired.

So far this year (2018), alcohol and/or drugs were a factor in the deaths of 39 people on OPP-patrolled roads.

From January 1 to mid-October 2018, (the OPP's latest data) the OPP laid more than 6,700 impaired driving charges across the province, 283 of which were impaired by drugs.

“Drivers who consume cannabis and think they can avoid detection by the OPP need to think again. The OPP has a strong set of tools and skills that enable them to take drug and alcohol-impaired drivers off our roads. Whether a person is driving under the influence of drugs or alcohol, impaired is impaired. Both forms are dangerous, serious criminal offences and they carry similar penalties,” said Interim Deputy Commissioner Rose DiMarco, Provincial Commander of Traffic Safety and Operational Support.

The OPP's Standardized Field Sobriety Test-trained officers and Drug Recognition Experts have been in place for years and continue to prove effective in identifying drug-impaired drivers.

“Make no mistake - just because recreational cannabis has been legalized doesn't mean you can drive while under the influence. Driving impaired - whether from drugs or alcohol - remains a serious criminal offence. I want to assure the public that police officers across the province have received the training they need to identify drug-impaired drivers and will continue to keep roads and highways safe,” noted Sylvia Jones, Minister of Community Safety and Correctional Services.

Novice, young (under 22), and commercial vehicle drivers cannot have any alcohol or drugs in their system while driving.

When transporting cannabis in a vehicle, it must be in its original package that has not been opened, or it can be packaged in baggage that is fastened closed or is not otherwise readily available to any person in the vehicle.

If you suspect that a person is driving or about to drive impaired by alcohol or drugs, you should call 9-1-1 to report them to police.