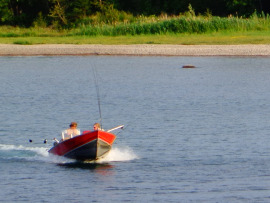 Drinking and boating accounts for approximately 40 per cent of boating-related fatalities on Canadian waterways. With the upcoming legalization of cannabis, the CSBC, along with the OPP and other marine safety partners, share concerns about the negative impact this issue may have on boating incidents and fatalities.

In an effort to raise awareness and reduce alcohol/drug related deaths, the CSBC and its partners launched 'Operation Dry Water' over the civic holiday long weekend for the sixth consecutive year.

With the boating season in high gear, it is an ideal time to remind Canadian boaters about the risks of boating while impaired by drugs or alcohol. The end goal is to ensure safer and more enjoyable recreational boating for everyone. Combined with sun, wind, waves, and the rocking motion of the boat, the effects of alcohol and drugs on the water can be greatly increased.

"The CSBC, its partners and sponsors would like, through this and our other initiatives, to raise attention to the problem of boating under the influence and to remind boaters to boat sober," stated John Gullick, chair of the Canadian Safe Boating Council. Operation Dry Water will focus on the potential risks of impaired boating, and remedies that are currently in place to discourage it.

Federal laws dictate that boaters can be charged with Impaired Operation of a Vessel under the Criminal Code of Canada if they are found to be impaired by alcohol or drugs. Under current and proposed legislation, human-powered craft are not excluded from the definition of a vessel and are subject to the same penalties. A number of provinces including Ontario have enacted legislation in which impaired boating can result in drivers losing their automobile driving privileges.

Whether you are a boat operator or passenger, all boaters have a role to play in helping ensure that no one operates a vessel while impaired by alcohol or drugs.

This initiative is made possible through the support of Transport Canada's Office of Boating Safety.