On Saturday, May 2, 2015 at approximately 3:08 a.m., Grey County Ontario Provincial Police (OPP) received a report of a structure fire on Hwy. 26 between Grey Rd. 12 and the 7th Line in the Municipality of Meaford.

A Busy Earth Week in Meaford

The Municipality of Meaford has been a beehive of activity once again during Earth Week.

Another Successful Bowl For Kids' Sake 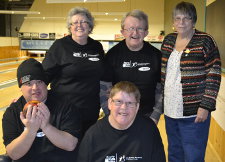 Big Brothers Big Sisters of The Georgian Triangle (BBBSGT) announced today that the 2015 Bowl for Kids’ Sake presented by Crozier & Associates raised over $100,000 in the event’s 37th year. This was the 6th year running a second location at Meaford Bowl.

This year $8,200 was raised from the Meaford and Thornbury communities at Meaford Bowl which brings the five-year total to over $61,000 raised in Grey County.

On Sunday, May 3, the Residential Hospice of Grey Bruce will be hosting hikes in seven communities across Grey and Bruce as a part of a national day of action to raise funds and awareness for palliative care initiatives.