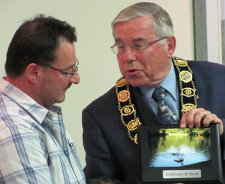 The swans at Meaford's Lakeview Cemetery have officially been named.

In April the municipality announced a contest seeking names for the two swans who reside at the cemetery, and the winning entry will see the swans named “Ambrosia” and “Snow”.

Get Ready For The Antique Tractor Show

Antique tractor enthusiasts will flock to the Reiners' Farm on Grey County Road 12, south of Grey Road 40 on August 9 for the Mervin Lush Memorial Antique Tractor Show and Harvest Celebration.

The Meaford Hospital Foundation has had a busy summer. After another successful Harbour Run/Walk/Stroll event earlier this month that raised approximately $35,000, the Foundation has found new support, and have recognized a long-standing donor.

Churches are well known for their fund-raising dinners, but on Sunday evening, July 20th, Olivet Baptist Church surprised many by inviting local parents to a free roast beef dinner (and dessert too) with no strings attached.