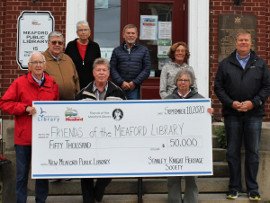 The Meaford Public Library has announced that the Stanley Knight Heritage Society has given a $50,000 donation to the new library building.

At the cheque presentation, David Knight said, “We five represent the eight children and 25 grandchildren of Stanley Knight. He cared greatly about the public resources of Meaford and, in particular, the Library. We are delighted that the Stanley Knight Heritage Society is able to financially support the development of the new Public Library building.”

In recognition of this donation, a room in the new library will be named after Stanley Knight.