The Pet Expert: Why Does My Dog Pull? 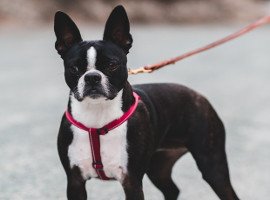 How many times have you seen someone walking their dog and they are hanging on for dear life as their overly excited pooch drags them down the road? The dog is often wheezing, hacking, and coughing during this ordeal, however this does little to slow him down as he continues to pull relentlessly.

In North America, excessive pulling is a problem for millions of pet owners, and is among the most common reasons for dogs not only being surrendered to shelters, but euthanized early as well.

There are many reasons as to why a dog feels the need to pull, and only when we begin to understand the logic behind these undesirable behaviours can we develop a safe and long-term solution to problematic pulling.

In this week’s article, we will explore the many reasons why dogs pull, and next week we will discuss how to remedy this issue for good using force-free, positive reinforcement.

So, why do dogs pull? There are many reasons. Let’s get right into it!

Going for a walk is one of, if not the most exciting part of a dog’s day. Even the simple act of reaching for the leash is enough to send most dogs into a frenzy. There is so much energy built up in the anticipation of the walk itself, that by the time you open your front door, the excitement is absolutely overwhelming.

In this revved up state of mind, dogs do not listen well as commands typically fall on deaf ears. Before you begin any meaningful loose-leash training with a high-energy dog, you first have to let them run off some of that pent-up energy.

Whether it's a backfiring vehicle, a person on a bike or skateboard, or an altercation with another animal, there are many things that can cause a dog to be fearful or anxious during walks. The result of this fear and anxiety is a dog that may pull uncontrollably to get away from a perceived threat.

Negative experiences on a past walk, even something that happened a long time ago, can have a long-lasting effect on a dog’s psyche. Dogs may associate past negative experiences with the act of walking itself, so changing the negative association is the key to correcting this unwanted behaviour. Fearful and anxious dogs are unlikely to respond favourably to most forms of positive reinforcement, so working with a trainer qualified in canine behaviour is advisable. Leash reactivity is also very common among fearful and anxious dogs. More on that next.

When a dog feels excited, frustrated, fearful, uncomfortable, or restrained on a leash it can lead to what is known as leash reactivity. Perceived threats or stimuli can engage a dog’s fight or flight instincts. Normally, a loose dog (with no leash) would have the means to either put a safe distance between them and the threat by running away (flight), or running towards it (fight).

Reactive behaviours during on-leash walking can span from overly excited playfulness, to dangerous, alarming aggression. Reactive dogs will commonly bark, whine, growl, or lunge towards the object of their attention. Regardless of the motives behind the reactivity, excessive lunging on a leash makes for a tense and unpleasant walk.

Does your dog simply love to chase anything that moves? Odds are you have a dog with a high prey drive. This innate desire to chase down prey is a highly sought out trait that has been bred into many working dogs over thousands of generations. Dogs with high prey drives are likely to pull due to the uncontrollable compulsion to chase.

While virtually any dog can be born with a high prey drive, the most common breeds include Rhodesian Ridgebacks, Airedale Terriers, Greyhounds, Bull Terriers, Springer Spaniels, Huskies, German Shepherds, and Chihuahuas.

For the purposes of loose-leash walking, capturing the sustained attention of a high prey drive dog can be a challenge as they are often focused on scanning their surroundings constantly. Using high value treats as a training aid can be a great motivator as you try to keep your dog’s focus away from any chase-worthy stimuli.

Dogs don’t come with a set of rules and guidelines; these are things they need to learn over time. Dogs are products of their environment, and if pulling on the leash during walks happens for long enough, it becomes normalized. Once a behaviour like pulling becomes normalized, dogs accept it for what it is.

If dogs are allowed to pull during their walks, what would ever lead them to think that this behaviour is a problem? Considering the countless dog breeds that have at some point been bred for pulling heavy loads, they may be inclined to think pulling is exactly what they’re supposed to be doing.

So, how do you correct all this unwanted pulling? You can read all about it in next week’s issue of The Meaford Independent.