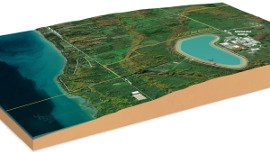 Time is running out for those wanting to provide input regarding TC Energy's proposed hydroelectric pumped storage facility on Meaford's Tank Range, as the Department of National Defence's commenting period closes on Friday, July 31.

The proposal has been the subject of significant concern for many Meaford residents since first learning of it nearly a year ago. In the months since the proposal first surfaced, a number of Meaford residents mobilized, forming the Save Georgian Bay group to raise awareness both in the community and beyond its borders.

TC Energy touts the proposal as a green initiative that would consume inexpensive off-peak power at night to pump water from Georgian Bay into a 374 acre storage reservoir located 150 metres above the Georgian Bay shoreline on the military base. The reservoir, which would hold 20 million cubic metres of water, would be emptied back into Georgian Bay during peak usage periods, driving hydraulic turbines to generate electricity.

Proponent TC Energy has been granted permission to undertake a feasibility study, and the temporary access agreement provides TC Energy with one year of access in order to complete its studies. The DND is conducting its own study, which will determine if the proposed facility could co-exist with activities at the 4th Canadian Division Training Centre.

Initial estimates by TC Energy have pegged the cost of the construction of the project at more than $3.3 billion.

Local residents, particularly those living in close proximity to the site, have raised a number of concerns ranging from potential damage to fish and other wildlife in Georgian Bay to fears that a failure of the reservoir could put hundreds of residents living below it at risk.

Save Georgian Bay organizers have worked tirelessly to raise awareness of the proposal and its many concerns, and those efforts have been rewarded with a number of design changes recently announced by TC Energy in response to some of the concerns raised. Those design changes were the focus of a July 22 virtual meeting hosted by TC Energy.

Among the changes proposed by TC Energy are a relocation of the water intake and outtake away from the shoreline, and a change to the location of the power house which, according to TC Energy, will now be buried within a cavern, reducing visible signs of the facility. TC Energy has also pledged to run the transmission lines sub-sea across the bay, as opposed to over land.

Meeting moderator Graeme Burt opened the virtual open house meeting by suggesting that input from the public has been a driving force behind the recent design changes.

“Our project has evolved significantly (since the winter public meetings), thanks in large part to your input as well as our ongoing engineering studies,” Burt told the virtual meeting attendees.

While opponents acknowledged the design changes, for many they are of little comfort, and TC Energy's virtual open house was attended by more than 400 concerned citizens, who, when given the opportunity to ask questions, put forward more than 300.

Though TC Energy dedicated more than an hour of its two-hour virtual open house to answering questions, only 30 of the hundreds of questions could be answered live during the open house. TC Energy has pledged to provide answers to all questions asked on its website.

Participants in the virtual meeting identified a number of concerns about the proposal. TC Energy representatives provided many answers related to the project design and potential impacts, but for the 147 neighbouring property owners, one question was not as easy for TC Energy to answer.

“Will TCE have funds available to compensate cottagers directly below the reservoir if and when their insurance costs go up because of flood risk? Will TC Energy insure our properties if our insurers refuse coverage based on increased risk?” asked neighbouring resident Robert Baranski.

“Two components to that. Firstly this facility has got to comply with all applicable standards, and it is going to be insured by TC Energy,” said Mikkelsen. “Our expectation is that it should not impact the ability or cost for residents to obtain insurance. If there are questions out there, issues that are being raised about insuring properties, we are happy to discuss that further with individual property owners.”

Some residents participating in the virtual meeting indicated that they have already been told by their insurers that their rates will increase should the facility be constructed.

TC Energy was also asked why, with advances in battery storage technology, the pumped storage model is preferred.

Mikkelson suggested that there are several technologies that will be crucial to managing Ontario's energy system in the future.

“This facility is designed to provide bulk storage, so large scale storage moving vast quantities of electricity from times of surplus to times of need,” Mikkelsen responded. “There is a portfolio of storage resources that will be necessary to manage the system in the future, so I think there is a very important role for things like the lithium ion Tesla batteries in addition to the pumped storage facility that we're proposing here.”

Those wanting to offer input or opinions about the proposal can send an e-mail with feedback to Holly King, Section Head, Directorate Real Property Services, DND, at ThirdPartyAccess@forces.gc.ca. The deadline for submission of comments is July 31.