The Pet Expert: How Dangerous Are Cat Bites? 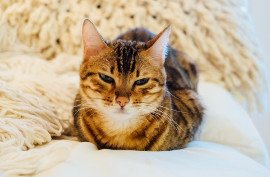 Cats are truly fascinating animals. Even after more than 4,000 years of domestication, cats, unlike dogs, have still retained much of their primal instincts. Gifted with superhero-like physical attributes, domesticated cats are still considered apex predators.

In addition to being perfectly evolved hunters, cats can perform remarkable physical feats, like jumping as much as ten times their height from a standing position. This would be the equivalent of a 6-foot tall person jumping over 60 feet in the air!

Cats make wonderful companions; they are independent, intelligent, and affectionate. However, as cute and cuddly as cats may be, they do have a wild side, and can act erratic at times. Of all the unpredictable behaviours cats exhibit, mouthing and biting are among the most common.

Whether it's during play with a toy, a gentle chin scratch, or getting brushed, many cats bite - especially after being touched on the more sensitive parts of the body like the hip area at the base of the tail, and stomach. And what may appear to be nothing more than a simple bite may result in hospitalization.

So, how dangerous are cat bites?

Cat bites can be deadly. Contrary to popular belief, bites from cats are not more dangerous because they have more germs in their mouth, rather, the increased risk is primarily due to their sharp teeth. While a bite from a dog is likely to leave a larger wound, their teeth are more blunt and typically don’t puncture as deep. Sharp cat teeth can easily penetrate the skin, pushing bacteria deep into flesh, tissue, and even bone, creating the perfect environment for infection.

Bites on the wrist or hand have a significantly higher risk of hospitalization compared to bites on other areas of the body. This is why 1 in 3 people bitten on the hand or wrist by a cat require hospitalization, and two thirds of those hospitalized required surgery, according to a three-year Mayo Clinic study.

Once the bacteria from a cat bite gets deep into tissue, like a joint or tendon, it can grow relatively protected from the blood and immune system. This can lead to serious infection requiring medical intervention. Additionally, cats commonly carry a particular strain of bacteria that is rather difficult to remedy with antibiotics alone.

Since many cat bites appear to be no more than little pin pricks, people tend to be dismissive of their severity. This is a huge mistake. Cat bites, especially to the hand and wrist, need to be taken very seriously and should be assessed by a doctor.

According to the World Health Organization, in the United States there are an estimated 400,000 cat bites every year, resulting in over 66,000 hospital emergency room visits.

Immediately after getting bitten by a cat, it is advisable to wash the area with a combination of 1 teaspoon of table salt in 2 cups of clean water. Try to not scrub too thoroughly as you may damage the surrounding tissue and delay the healing process. After the area has been cleaned, it is wise to see a doctor as soon as possible for proper treatment and care. To treat a cat bite, your doctor will most likely prescribe antibiotics to reduce the risk of further infection, and possibly a tetanus shot for good measure.

While cats can be among the most rewarding companion animals to share a bond with, bites need to be taken seriously.

Brandon Forder, known as The Pet Expert, is vice-president of Canadian Pet Connection, an industry leader in healthy pet lifestyles. Brandon holds multiple certifications in pet nutrition, and has more than twenty-five years' experience specializing in pet health and behaviour. He has written hundreds of informative pet-related articles for newspapers, magazines, radio, and the popular Ask the Pet Expert blog. Brandon is highly skilled in pet problem solving, and enjoys teaching others about smart and responsible pet ownership. To learn more, visit www.CanadianPetConnection.ca.