The Pet Expert: The Impact of Working Dogs in Recent Human History 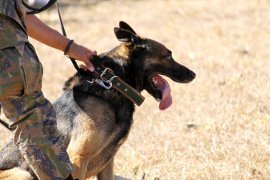 Throughout modern history, dogs have worked alongside humans in a variety of specialized roles. Many scientists agree that humans and dogs have coexisted together for almost sixteen thousand years.

This past Remembrance Day, millions of people from France, Belgium, Canada, and other countries took time to honour the brave canines that served and sacrificed in both World Wars.

Not surprisingly, dogs have been alongside humans in battle dating as far back as ancient Egypt and battles of the Romans, and even further still. In fact, the earliest record of dogs being used for battle was in mid-seventh century BC.

Let’s have a look at some of the more significant roles dogs have played in recent history.

Dogs in World War One

During WW1, many breeds of dog made names for themselves, serving in a variety of roles. Roles were heavily dependant on a dog’s size, temperament, and individualized training. German Shepherds and Doberman Pinschers were among the most popular breeds. It is estimated that almost 55,000 dogs took part in this war; 30,000 from Germany, 20,000 from France, Belgium, and Britain, and another 3,000 from Italy. Surprisingly, the U.S. did not begin using dogs for the war effort until WW2, except for a select few in very small roles.

As sentry dogs, courageous canines were assigned to guard camps and hideouts as soldiers slept, quietly alerting them to intruders with low, calculated growls or louder barking, depending on how close the stranger was and how quickly they were approaching.

Casualty dogs were another highly skilled position for canines in WW1. They were trained to find wounded or dying soldiers, carrying important medical supplies so soldiers could treat themselves, and would also provide emotional support if they were immobilized. They were also known as 'Mercy Dogs', as they would wait with dying soldiers so they wouldn’t have to die alone.

Trench warfare, especially in WW1, was extremely messy, making communications difficult. Messenger dogs were capable of carrying messages from one troop to another with rapid speed and excellent accuracy. Because of this, many dogs were trained specifically for this task. In fact, one canine was recorded as travelling over 4,000 metres through the Western front through terrain that was classified as “very difficult” in less than 60 minutes, delivering a message to a brigade when all other forms of communication had failed.

Scout dogs were highly trained to detect enemy troops, and could smell them from up to 1,000 yards away, long before any human could. They were used for advancing troops, especially in forested areas with low visibility. Scout dogs were trained to stiffen up, raise their hackles, and point their tail to indicate which direction enemies were coming from.

Smaller breeds, such as terriers, were trained to hunt pests like rats in the trenches, helping to prevent the spread of disease among troops. Some dogs were also used a mascot dogs, to boost troop morale and keep them company.

During WW1, dogs proved themselves to be highly valuable allies. It’s no surprise that their roles evolved in WW2 to become much more specialized. This included bomb and mine detection dogs, tracking dogs, and dogs used for medical testing (something that became highly controversial after the war). Other countries, such as America, Japan, and Canada, also made use of highly skilled canines to support their troops during WW2.

Nowadays, it isn't uncommon to find canine companions working as guide dogs for the deaf and/or blind, emotional support animals, and even seizure detection dogs. The capabilities of highly trained canines goes even further, with some dogs doing jobs that humans and technology cannot. Here are some examples:

Military canines are still a big part of militaries around the world. They work as therapy dogs for PTSD sufferers, intimidation dogs to scare away potential threats, bomb detection dogs, search and rescue dogs, and more. Many of their modern roles are the same as police dogs.

Policing has evolved dramatically over the last century, and police K9 units have become a big part of that. They specialize in everything from chasing down and holding criminal suspects, sniffing out drugs and explosives, search and rescue, and also emotional support for victims of abuse or violence. They perform similar roles for fire and rescue organizations, airports, and other areas that require drug or explosives detection as well.

Some dogs have been trained to sniff out certain types of cancers in humans, and can do so with extreme accuracy. The bird flu virus that has affected millions of people is also a disease that canines are being trained to accurately identify in humans. Other scent detection dogs are trained to sniff out rare species of birds, rodents, and plants around the world, helping conservationists find rare species.

A goldendoodle from New Brunswick is currently working the canola fields of Alberta, sniffing out a dangerous and invasive root disease known as clubroot. He works alongside a German Shepherd, and they are the only two canines in the world trained to stop this potential devastating plant disease.

As the relationship between man and dog continues to develop and evolve, there is no doubt working dogs will continue to play a significant role in the future. Regardless of what roles dogs play, one thing is for sure: they will always be man's best friend!