The Ace of Spades Has Been Caught! 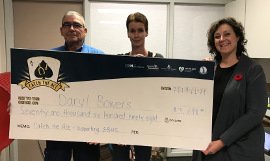 Congratulations to Daryl Bowers from Owen Sound, who not only won $3,832 in the Week 43 draw but he also won the $67,866 progressive jackpot, an amount of money that has been growing since the first ticket was sold. The Ace of Spades was revealed in envelope 38.

Bowers has been supporting Catch the Ace since week one of round one, purchasing four tickets each week. When round two started, he began purchasing four tickets indicating if his ticket was drawn to open envelope 38 and 48. After envelope 48 was opened, he started buying four tickets all indicating envelope 38. When asked what he would do with the money Bowers responded, “It will go in the bank and help with ongoing home renovations.” He joked that maybe now he will hire a painter to speed up the work, but otherwise, not much will change, and he will continue to do the work himself.

Bowers is an employee of Grey Bruce Health Services working in maintenance, originally in Owen Sound and now in Markdale. He is an active member of the Markdale Hospital Social committee and was barbequing hot dogs when he found out he had won the big jackpot. He feels the money for Catch the Ace is going in the right direction; the MRI is a “great cause”. As the weather gets cooler Foundation staff asked if a vacation to warmer weather was in the plans. Bowers said, “Maybe - it takes a lot for me to get out of the County.”

“A big thank you to all who participated in the success of this lottery, as the progressive jackpot grew so too did the community excitement. The success would not have been possible without the help of our ticket sellers, buyers, volunteers, and staff at all five hospital foundations,” said Amy McKinnon, Owen Sound Regional Hospital Foundation’s Executive Director. “And congratulations, Daryl!”

Over $100,000 has been raised from the Catch the Ace Lotteries in support of the purchase of a new MRI system at Owen Sound Regional Hospital. The MRI in the Owen Sound Regional Hospital is used over 11,000 times per year on patients from across Grey and Bruce to diagnose a range of medical conditions. Tests done with the next generation of MRI technology will be faster, quieter and more comfortable for patients, and will provide physicians with higher quality images to aid in more accurate diagnoses.

As Owen Sound Regional Hospital Foundation’s AGCO license 10570 concludes, the Five Foundations of GBHS are preparing for round three of the Catch the Ace Lottery.

Please visit www.gbhsmri.ca or contact your local hospital foundation to learn about the MRI system and opportunities to donate.