The Pet Expert: How Does Your Dog Know When You’re Coming Home? 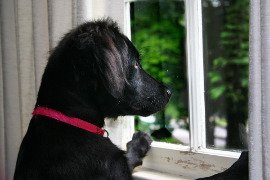 Your dog is at home, all curled up and enjoying a nice nap. Then, for seemingly no particular reason at all, he wakes and rushes immediately to the front door, tail wagging like crazy, mere moments before your arrival.

Have you ever wondered how your dog just knows when you or a family member is on their way home? Does it seem like they have a finely-tuned radar system, honed in on their favourite people? Believe it or not, it’s possible that they do. While this sense isn’t a traditional 'radar', with a sensor and a beacon, it could be considered much the same.

The few studies conducted on this mysterious canine 'sixth sense' have yet to show anything conclusive, however researchers have a number of theories on how dogs know when their owners are coming home. Although these theories are quite varied, they all rely on the concept of associative learning; environmental cues becoming associated with a particular set of events. Dogs and humans have co-existed, and co-evolved, for tens of thousands of years, allowing man’s best friend to study human habits rather thoroughly.

To give an example of this phenomenon, a dog may get used to the sound of a particular vehicle coming down the street, and associate that sound with the person who drives it. Therefore, whenever a dog hears that distinct make and model of vehicle, they expect to see that person shortly after. In this instance, the sound of the vehicle is the environmental cue, and the person coming home is the set of events. This may explain why some dogs become excited for some passing cars, and less excited for others, as certain vehicles may sound similar to one they recognize.

Another example of a sound that may trigger a dog’s heightened awareness could be a city bus. Perhaps the city bus passes your home at 4:25 every day, five minutes before you arrive home from work. When a dog hears the bus pass, they know to expect their person to arrive very soon. Other cues may include routine sounds, like the mailman, a school bus, a grandfather clock, and more. These sounds often happen at the same time of day, and dogs, being good students of sound, may use these cues to set their internal clock as they anticipate an upcoming set of events.

Dogs are remarkably intelligent animals, and are excellent time keepers. They pay attention to the passing sun, and seem to always know when it’s time for dinner, walks, and other routine-based activities. Dogs also learn to expect their owners to come home at certain times every day after work. This is why many dogs start to display excited behaviour up to half an hour or more before their owners get home. If your dog acts more enthusiastic upon your return than usual, it’s possible you made a stop on the way that delayed your arrival, thus intensifying the anticipation.

Another fascinating theory regarding the mysterious canine sixth sense pertains to how long you’ve been gone based on the concentration of smells in the air. Your pooch knows your scent intimately, and around the home your unique smell may lessen the longer you have been gone. These dissipating smells may act as a countdown; when this cue degrades to a certain point, they know you’re expected home soon.

Whatever it is that fuels a dog’s immeasurable senses, one thing is true – dogs make the best welcoming parties on the planet.