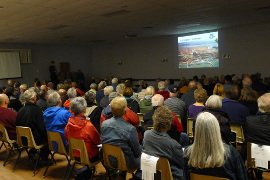 More than 200 residents attended an information session held at the Meaford & St. Vincent Community Centre on Saturday, October 12, focused on the proposed hydroelectric pump storage plant on Meaford's military base.

The information session was organized by citizen group 'Save Georgian Bay' who are concerned about the potential downsides of the proposed project should it be allowed to move forward. Presenters at the session highlighted issues with a similar project built in Ludington Michigan in the 1960s which was responsible for killing millions of fish even after a protective net was installed in an attempt to mitigate the problem.

Those who attended the meeting were warned of a number of potential issues aside from just the welfare of fish. Presenters warned that the proposed $3.3 billion project could cause a number of environmental issues and it could forever scar the natural landscape.

Asked why they declined the proponent's offer to attend and field questions, Tom Buck of Save Georgian Bay explained.

“We invited TCE to the first Community Conversation we held on August 31st.  TCE declined,” Buck advised. “I also invited TCE to join us at the October 12 meeting (today).  Yesterday (October 11) after 2pm I received an email message from Jennifer Link of TCE asking about presenting.  She did not provide slides for our group to review or the focus of her presentation.  I called her just after 3pm and she said she wanted to present in order to share the engagement process.  Our agenda was established on Tuesday and we had practiced our agenda and approach to invite dialogue with participants.  We had arranged and paid for the venue, we printed materials at our cost.  It was a Save Georgian Bay meeting.”

Buck suggested that TC Energy has had plenty of time to engage the public but has yet to do so.

“Despite having been talking with local municipalities and the DND for several months, TCE has not scheduled any community meetings to date.  Nor has the Meaford Municipal leadership.  Our interpretation of TCE's request to present the engagement process was that she had little information to share since there are no dates on the calendar for public meetings established by TCE,” Buck suggested. “Save Georgian Bay and other local groups are the only groups inviting the conversation about this proposal.  We are finding substantial concern about the project and many thousands of residents who clearly do not want this plant and the associated damage to the ecosystem, the high tension lines, fish kill, effect on water quality, effect on residents, impact on DND operations and more.”

Pumped hydroelectric storage requires pumping water from a lower reservoir to a higher reservoir, then releasing water through turbines to generate electricity. TC Energy says that the facility would reduce the cost of electricity for Ontarians by an estimated $250 million per year, though Save Georgian Bay members have their doubts about such claims.

The $3.3 billion project would require some 800 workers during a four year construction period, however once completed the facility would require just 15 workers.

While many who attended the meeting appeared to be opposed to the proposed project, some suggested that more information was needed from all sides in order to better understand the proposal and its potential impacts, with some suggesting the project could benefit the province in the long-term.

Organizers of the meeting encouraged residents to research the proposal and to ensure that they make their views known to both the Department of National Defence and TC Energy: