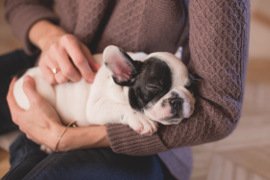 A new trend is on the horizon; one with potentially dangerous implications for pets in our community. Leasing pets, rather than paying in full, is making ownership for expensive designer breeds more affordable for potential pet parents.

Pet leasing is appealing to those who may not have the full cost of a new pet in-hand. While leasing a new car might make financial sense at times, leasing a pet seems to come with more risks than benefits.

This past August, the state of New Jersey banned pet leasing. This new legislation came into play after numerous complaints poured in from pet owners who had agreed to financing with a breeder, unaware they were being put into a lease. Eager new pet owners were being rushed into leasing contracts without fully understanding the terms and conditions. New Jersey has now joined Washington, Nevada, Indiana, California, and New York in banning pet leasing.

Similar to a vehicle lease, pet leasing often comes with conditions that may cause serious complications between pet, person, and pocketbook. Let’s break it down:

Leases come with additional fees, interest, and other charges. For most leases, including pet leases, regular monthly payments work out to more than the original price of the pet. This includes interest that accrues monthly, and often includes administrative fees from the leasing company itself. Many pet owners who were rushed into leases have reportedly paid more than twice the original agreed upon price due to the terms of their lease. These lease agreements, typically ranging from eighteen months to three years long, stipulate the dog does not actually belong to the owner until the balance is paid off completely.

There is also the very real consequence of repossession if monthly payments are not made on time - just like with a vehicle. While the exact terms can vary by lease, many pet owners risk losing their pets by repossession if they fall behind by only two payments. Of course, this may have a detrimental impact on the families who have lost a pet to repossession, and can have serious implications for the pets themselves. When this happens the dogs are typically no longer puppies, and are therefore less desirable in the pet marketplace as breeders try to recoup their losses by reselling the dog to another buyer. Thankfully, the ASPCA is not aware of any cases where an animal has actually been repossessed, but that doesn’t mean it isn’t happening. Still, the threat of repossession is enough to cause concern among pet owners trapped in a lease.

Another concern with many of these leasing contracts is that the dog owner is still responsible for paying the total balance of the lease even if the pooch is rehomed or deceased. One pet owner reportedly had to make payments for almost three years after their pet died. One can only imagine the emotional impact of having to pay for a deceased pet for years after they’re gone.

So far, only a handful of U.S. states have banned pet leasing. As more pet owners complain about the predatory nature of pet leases, we expect other states to adopt the same legislation in the near future. Hopefully, Canadian provinces follow suit.

That’s not to say all leases are a bad deal, but ultimately it’s important for the consumer to fully understand the terms and conditions of what you are agreeing to. Pet leases should have complete transparency, but the reality is many do not. In Canada, there is currently no legislation preventing leasing of pets.

Brandon Forder, known as The Pet Expert, is vice-president of Canadian Pet Connection, an industry leader in healthy pet lifestyles. Brandon has more than twenty-five years of experience specializing in pet health, nutrition, and behaviour. He has written hundreds of informative pet-related articles for newspapers, magazines, radio, and the popular Ask the Pet Expert blog. Brandon is proficient in pet problem solving, and enjoys teaching others about smart and responsible pet ownership. To learn more, visit www.CanadianPetConnection.ca.