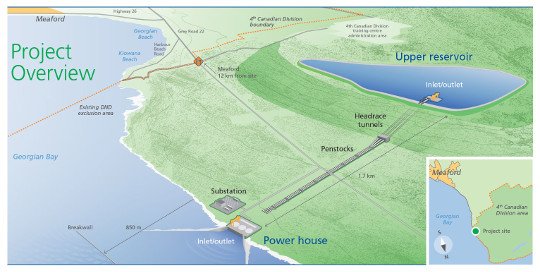 A public information meeting about the impact of the proposed plant is organized, hosted, and presented by Save Georgian Bay Group on Saturday, October 12, from 11 a.m. until 1 p.m. at the Meaford & St. Vincent Community Centre.

A press release issued by organizers on Tuesday calls on area residents to become informed and to share opinions.

“Georgian Bay needs our help! A project you may not know of will scar the beautiful Georgian Bay and Niagara Escarpment FOREVER! TransCanada Energy (TCE) proposes to construct a massive hydroelectric pump storage plant on the Canadian Army’s 4th Canadian Division Training Centre, north part of Meaford,” said organizers in the press release.

“The rate at which the water is pumped and released from and to Georgian Bay is huge—almost half the average flow over Niagara Falls. TCE modelled this plant after Ludington,” said organizers.

Organizers warn of an experience in Michigan, where a similar project was constructed in the 1960s.

“Even after a protective net was installed to mitigate killing 150 million fish a year; the plant still kills over 20 million fish per year because of the enormous volume of water that it draws from the lake. It serves as a giant food processor, mashing fish drawn into the turbines. The challenge to the fish population and the proposed location for the plant will displace birds and wildlife that live along and near the shoreline — loons, seagulls, cormorants, mergansers, eagles, geese, terns, sandpipers, ducks, deer, otters,” said organizers in the press release. “TCE will construct a huge concrete intake/outfall, and three breakwaters extending from and parallel to the shoreline. These structures will be the largest man‐made structures in Georgian Bay. They will rival the Collingwood Grain Terminal for size. Yet, unlike the pier, these structures will offer no recreational benefits to residents or visitors of Georgian Bay. Instead, they will destroy a stretch of beautiful pristine shoreline, restrict passage of fish, wildlife, and even small boats, interrupt the natural movement of sediment along the shoreline, cloud our beautifully clear waters, and smother fish spawning and rearing habitats. The pipeline that conveys water to and from the man‐made reservoir will extend approximately 1.7 kilometers inland, cutting a corridor up the Niagara Escarpment, one of the world’s natural wonders that has been recognized as a UNESCO World Biosphere Reserve. TCE will strip the pipeline corridor bare of all life in search of profit.”

In addition to attending the October 12 information session, Save Georgian Bay organizers are calling on concerned residents to contact elected representatives to express those concerns.

“We all share a responsibility to protect the natural beauty and unique ecology of Georgian Bay and Niagara Escarpment. So please join our effort to end this proposal, and to save Georgian Bay and Niagara Escarpment for our children’s future. Please phone your local town council, provincial representative, and federal candidates. Send emails, letters, make phone calls, distribute further this flyer. Let your neighbours know, let your friends know, get your family involved,” said organizers.

The purpose of the October 12 meeting is to engage community members in a dialogue about the proposed plant. Save Georgian Bay is a group of residents concerned about the impact of the proposed TCE plant.