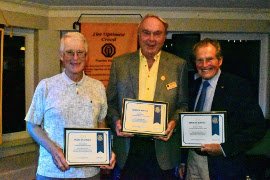 The Sydenham and District Optimist Club recently celebrated their 20th anniversary. The club has been serving youth in this area since 1999. On September 28 a dinner and dance was held at the Legacy Ridge Golf Club.

Forty-four members , guests, and past members attended. Club President Eileen Sunstrum welcomed all those present and outlined the many accomplishment of the club.

The club has helped several area families dealing with childhood cancer, the food bank through their Shop With A Cop program, several youth sports clubs, the children’s room at Chapman House, and holds the annual Canada Day celebration at Annan as well as numerous other projects. Murray Peer, the founding president, gave a talk on the history of the club and the history of Optimist International, which is celebrating its 100th anniversary. Midwestern Governor Doris Haw brought greetings from Optimist International President Rebecca Butler Mona. Three active charter members, Murray Peer, Bob Smith, and Jack Seaman, were honoured with a twenty-year service award.

Special guest speaker Cydney Madison Morris of Saugeen Shores told of her experiences with the Optimist-sponsored HOBY program (Hugh O’brian Youth Foundation). This is a motivational program for students in Grade 10. Cydney got so much out of the program that she returned to it as a volunteer councillor. Her enthusiasm was overwhelming and she brought a new excitement to those in attendance.

The outstanding member award was given to Jack Seaman and Gisele Wilson for their club contributions over the past year. A door prize of flowers donated by Simply Unique Flowers and Gifts of Meaford was won by Barb McCullough. It was announced that the quilt donated by the Blue Water Quilters Guild as a fund raiser was recently won by Nancy Kerr of Bognor.

A dance with live music form The Millpond Project entertained guests well into the night. A good time was had by all.

The club is always looking for new members. Call President Eileen at 519-376-9288 for details.