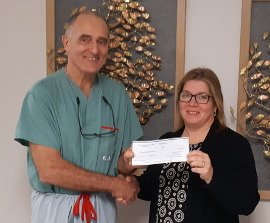 Jen Wright, Executive Director of the Meaford Hospital Foundation said, “The goal is to raise $4.7 million from community donations to purchase and install the machine in the first half of 2019.”

“The current magnetic resonance imaging machine arrived at Grey Bruce Health Services’ Owen Sound hospital in July 2004. An MRI typically lasts 10-12 years but right now we’re at the point where it’s difficult to get the unit serviced and parts replaced.”

The machine sees approximately 11,000 appointment times annually, mostly to take images of the head, spine, knees, shoulders, pelvis, abdomen, breasts, ankles, hips, wrists, and hands. GBHS says the MRI system is reaching the end of its lifespan and needs to be replaced.

The state-of-the-art MRI machine will have faster imaging times – the average test will be ten minutes shorter – which will help to reduce wait times. It will also have a more spacious table and tunnel, feature 3-D imaging, new software for cardiac and prostate imaging, and enhanced breast imaging for biopsy and detection, provide better-quality images, and be more energy efficient, quiet, and accurate.

The provincial government does not provide funding for equipment at Ontario hospitals. It will, however, continue to pay for the MRI system’s operating costs, such as those related to staffing.