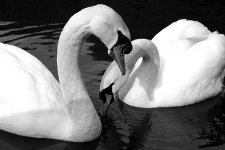 On November 9 cemetery staff was notified that the swans were on the loose, and a search was undertaken to find them, however so far, there has been no sign of them.

“On November 9 we received a call from a resident to let us know that the swans were walking free,” Meaford's Director of Community and Cultural Services, Dan Buttineau, told The Independent. “Cemetery and municipal staff helped in the search for the swans.”

While there is no sign of the swans, Buttineau said that there has also been so indication of a struggle with a larger animal.

“Traditionally when coyotes (or other animals) are involved, we'd see feathers or other evidence of a struggle,” noted Buttineau.

The swans have long been a popular feature of the cemetery, so much so that earlier this year, the community was invited to submit names for the swans.

In April the municipality announced a contest seeking names for the two swans who reside at the cemetery, and the winning entry saw the swans named “Ambrosia” and “Snow”.

Those were the names submitted by Meaford residents Brad Johnston and Marianne Ribey. Johnston attended the July 28 meeting of council for the announcement of the names, and he was presented with a plaque that included a photo of the swans with their names engraved. Ambrosia and Snow are both varieties of apples that have been grown in the Meaford area.

Buttineau said that it is possible that somebody stole the swans, though he thought it unlikely. If the swans are not found, there are plans to replace them when the weather warms in the Spring.

Anyone with information about the missing swans can contact the municipal office: 519-538-1060.