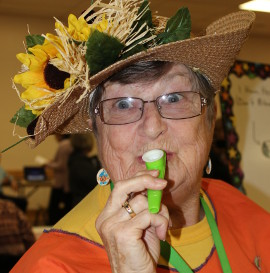 The first Meaford How-To Festival on March 5 can be chalked up as a promising new addition to community events.

"You just hum into it," veteran scarecrow Heather Handy said with a smile. "Just hum the tune you're thinking of."

Despite the less-than-serious nature of the kazoo demonstrations, or possibly because of it, the scarecrow booth slowly attracted more and more of the participants.

"I'll play any musical instrument if it makes people smile," said Victoria Midgley. "And it sounds like a trumpeter swan. You blow a kazoo and you see people smile. It makes me wonder why you need something to make you smile."

Bill Monahan, who runs a Meaford business that installs electronic systems in people's homes, said, "A lot of people are confused by technology."

"That's where I get a lot of my work," he added. "People call in who bought a new TV and thought they could just plug it in like an old TV, but you need all of this other stuff to figure out how to make it work."

Monahan was gesturing to a complex array of cables ranging from the familiar analogue varieties with two and three jacks to others such as HDMI. Many of the new options, he said, are actually somewhat easier to work with - once you understand what they are, he said.
The ongoing conversion from analogue signals to digital often perplexes people, Monahan said, and that's where his type of expertise comes in useful.

"The whole entertainment system is going digital," he added. The rise in popularity of digital offerings such as Netflix is making understanding the transition even more important. "I've been in Meaford for six years now, and some of the things I've sold are now obsolete," Monahan said.

He praised the organizers of the festival for having the vision to offer the festival, which he believes will grow bigger in coming years.

"Well, we have so many wonderful volunteers that can show you how to do something at the library, and then I saw the Pickering library does a how-to festival, so it was a great combination of looking for ideas on how to promote local people with talents," said Amy Jennison, the Meaford Public Library community outreach coordinator, and one of the organizers along with the Meaford Chamber of Commerce.

She was rather pleased with how the event was going, and expected it to keep improving in future years. "I think it's going pretty well," she said. "I thought this was absolutely perfect to show off people here. It's still early, and I'm hoping for more people, and the demonstrators are having a lot of fun showing off their talents. People have been really positive about it."