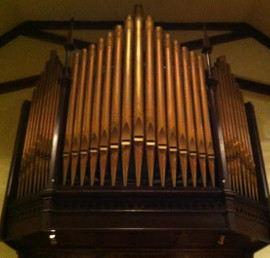 The Grey Bruce Centre of the Royal Canadian College of Organists is preparing to present its 15th annual Good Friday devotion of music, scripture, song, and prayer, this year hosted by Grace United Church in Thornbury.

As always, there will be no admission charge. A free-will offering will be divided between the Centre’s scholarship program for young organists, and a ministry of Grace’s choosing.

Playing during the program will be a number of Grey Bruce’s most experienced and talented organists, joined by well-known clarinetist Robert Tite. The devotions consist of readings centred on the death and resurrection of Jesus Christ, with musical commentary, including well-known hymns sung by the audience.

“This program is unique,” says Fr Ed Wagner, the Vice-President of the Grey Bruce RCCO centre. “To date, there seems to be nothing quite like it anywhere else in Canada or the United States. ‘Harmonies’ was originally compiled by Ann Clark, one of our Centre members, and her pastor at the time, the Rev. Geoff Hearne. We’ve been offering it throughout our area, from Hanover and Port Elgin to Chesley and Wingham. Year after year, both presenters and members of the audience speak about how powerfully moving ‘Harmonies’ is.”