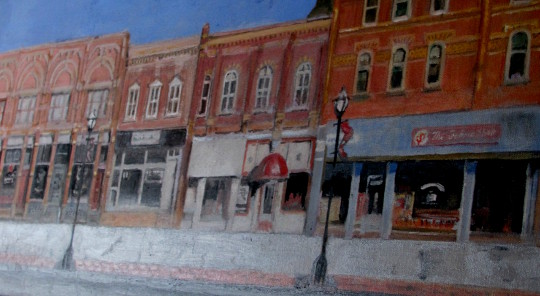 After learning that the planned Ontario Municipal Board hearing, regarding a planned re-development of a block of century-old buildings on Sykes Street, will not go forward after the announcement on Thursday, February 11 that a settlement had been reached, The Meaford Independent contacted ACO Meaford representative John Kerr to ask what he and his organization have learned through the process in their attempt to preserve four downtown heritage buildings, and what concerns still linger.

Perhaps the biggest lesson learned by Kerr and his organization is that while all of the tools are available for those who want to fight for a cause, democracy doesn't come cheap, and can be out of reach without significant funding.

TMI: What have you and your organization learned from this experience?

Kerr: I've learned a couple of things. First, I thought mistakenly that the heritage conservation area bylaw and everything that went into that – it took a long time to create that document, and a lot of professional assistance went into making it, and there are all kinds of promises in there that in order to pass it, council basically had to say 'we sign on to all of this', but that is very, very difficult to enforce if council changes its mind. They didn't even have to completely change their mind and say, 'No, we repudiate that and we now think we made a terrible mistake and we're going to throw it out and start again'. I don't think that would be right either. That would be clear cut. They didn't do that, they didn't think they had to do that, they could skate around it. And I would have loved to have been able to take that to the OMB, but the reality is that we just don't have the resources to do that.

I know that there was a case not that long ago where a municipality did what Meaford has done, and when they got it to the OMB, the OMB sided with the plaintiffs and said, 'No, you guys promised that you were going to do this, that, and the other thing', and they held the municipal council to what they had signed onto. I was really hoping for that sort of result in this case, but you need tremendous, tremendous support to be able to do that.

In fact it's so expensive that the chance of anyone calling a municipal council to account is very unlikely. My discussions with various people at ACO is that they know that already, I didn't. I was a little naive.

TMI: What should concerned residents realize? What do we need to be watchful for in the coming years?

Kerr: I think that people have to be more aware of council's concern for the short term financial situation. I think some naive people might see this development as a panacea to a small town's woes. That's not really very intelligent, but there is a lot of pressure on council to save very small sums of money, and politically they seem to have bought that, that this is important, and I disagree. I think people have to understand that they, the people as a whole, are putting a huge amount of pressure on council to make boneheaded decisions.

TMI: What is your biggest concern about future of Meaford's heritage buildings?

Kerr: I think that it's a matter of precedent here. Council has allowed the developer to tear down four heritage buildings. Why? Because he (the developer) wants to. As a developer, he wants to. That is not good planning, it's no planning. They assume that if he's prepared to throw I don't know how many millions of dollars into this hole in the ground that he's about to create, that it's going to have a positive benefit to the town. I don't see that. Nowhere that I have seen, is there a business plan, or any kind of a plan that says this project is going to provide the following benefits. This is what we hope to gain at the end of the day.

TMI: What advice do you have for people that might want to get involved in initiatives in the community like preserving heritage?

Kerr: Be very realistic as to what you can achieve. At the end of this exercise, I believe we did accomplish something worthwhile. It's not of course what we wanted; ultimately we wanted to stop it, but we did, I think, have a hand in improving the development that is supposed to take place. And I say 'supposed to take place' because I'm not at all convinced that it will. I think the developer is going to wind up spending more money than he will be able to recoup, and when he realizes that, he's going to stop, and walk away from it.