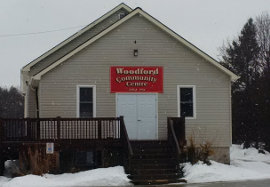 Most of the volunteers who have helped operate the Woodford Community Hall for the past few years quit recently in the midst of a conflict with the municipality.

The trouble began on January 15 when the volunteers sat down with members of the municipal management team, and among the disputes is whether or not a board of management should be formed to run the hall. In 2013 Meaford's other two rural community halls, Bognor Hall and Riverside Hall, adopted the board model, however Woodford Hall opted to operate under a “friends of” model.

On October 26 of last year, council approved a motion to review the governance of Woodford Hall, and to implement a board model similar to the boards that operate Bognor Hall and Riverside Hall, however at the meeting on January 15, volunteers were less than pleased with the idea of forming a board, and they became more frustrated when they were told that a planned kitchen renovation – for which the volunteers had been raising money from the community – would not be undertaken in 2016.

“Our understanding was that there was to be a review, which we welcomed because for the last two years we've been functioning as their sort of project “friends of” model. So we welcomed this review, and thought that it would actually be (a “friends of” model),” former Woodford Hall volunteer Jan Sideris told The Independent.

Sideris said that she and her fellow volunteers were surprised when the municipal representatives – which included Meaford's CAO, treasurer, and the Director of Parks, Recreation, and Culture – told the volunteers that they were not to hold meetings, or make bookings for the hall, or even make presentations to council.

The volunteers were also told that there would not be any kitchen renovations taking place in 2016, in spite of several thousand dollars worth of contributions – both financial and in-kind, that had been collected by the volunteers for the project. Sideris said that a 15-piece kitchen unit set that had been secured by the volunteers for the planned renovation has been removed from the hall so that it will be kept safe and out of the way.

Meaford's CAO Denyse Morrissey had a different take on the January 15 meeting with the Woodford Hall volunteers.

“Overall, it is our opinion that a productive meeting took place in that the Municipality of Meaford was able to clarify the role of a board versus a friends of model, outlined our commitment to accessible buildings and what that entails especially when any renovations or upgrades are undertaken and the current accessibility related limitations of the facility. It was also outlined that in either model the direct management of capital related costs or projects for a municipally owned building, and their priority and need, including validation of need, is the responsibility of the Municipality and a function of the annual budget(s). At this time we do not anticipate any major capital projects, like the kitchen, proceeding in 2016 and they will be evaluated in the context of the direction to staff for future capital consideration and budgets,” Morrissey told The Independent when asked to comment on the claims made by the Woodford volunteers. “As an outcome of the meeting, staff will prepare a follow up report for the February 1, 2016 Council meeting based on the confirmation from January 15, 2016 that the volunteers want to remain as a Friends Model and not become a Board.”

The CAO also said that the “Friends Of” model has been “very successful in other communities and ensures that there is still a very active volunteer group who participates in the facility and serves as high profile ambassadors representing the facility.”

A resignation statement issued on Monday, January 25 by seven of the now former volunteers suggests that the January 15 meeting was no ordinary meeting.

“The agenda for the January 15 meeting was not structured as a discussion, but as an announcement of a decision, and as a notice of termination, immediately of duties being performed by the Woodford volunteers,” read the statement. “Since 2013, volunteers at Woodford Hall have operated within the framework established by the (municipal) administration.”

The volunteers also took issue with their treatment by municipal managers, who they characterized as acting rudely at the January 15 meeting.

“As volunteers we require some professional respect and a common purpose for our commitment. The CAO was very clear in her statements (at the January 15 meeting) that we 'need an attitude adjustment', and we 'are not team players'. Our group has always functioned, even with differences of opinion, with courtesy and mutual respect. Rudeness is not acceptable.”

The volunteers are concerned about the future of Woodford Hall; they also suspect that the local Legion has set their sights on Woodford Hall as a meeting place, though Meaford's CAO told The Independent that the Legion has expressed interest not in Woodford Hall, but in Riverside Hall.

“As you may know the Legion recently sold the building that housed their organization and services. We are not aware that the Legion has expressed an interest in renting or booking space at Woodford but if the case it would be welcomed as expanded use of Woodford increases the engagement by a local organization and the community which is consistent with Council’s Strategic Priorities. We are aware that the Legion is reviewing the opportunity to rent/book space at Riverside Community Hall,” said the CAO in response to our questions about plans for the Legion.

A report from municipal management will be prepared for the Monday, February 1 council meeting.