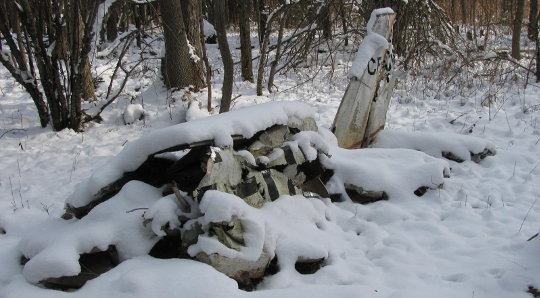 Visiting the Silent Valley trails in the former Sydenham Township is akin to finding a place to worship in the woods.

Located just north of Grey Road 18 on the 2nd Concession South in the Bognor area, the 200-acre property has been owned by the Bruce Trail Conservancy since 2013. "In 2013 the BTC acquired the land we now call Silent Valley from Hallman Lumber," Ron Savage said. "It consisted of 203 acres of wet land, reforested farm land, some old growth forest of both cedar and hardwood, and the Niagara Escarpment."

Savage is the veteran trail director for the Sydenham Bruce Trail Club, and Silent Valley is his favourite spot to visit since its acquisition from the Hallmans two years ago. It's the site of an old pioneer homestead, which must have been an impressive sight back in the 1860s and 1870s when the Wilson family settled it.

"Over the fall of 2013 and the spring of 2014 I found a treasure trove of interesting sites that any hiker would find interesting," Ron Savage said. "The foundation of the early settler’s cabin, their huge barn and their 20-foot deep hand dug well (which) I almost fell into."

In particular, the massive ruin of the barn on the property is an intriguing sight, as is the marvellously well-constructed dug well. The 20-foot well is lined with stones for its entire depth, which testifies to the care with which it was constructed. The barn was huge for its era, measuring 92 feet by 62 feet. Some of the stone foundation is still intact, a brooding presence in the midst of a second- or third-growth forest.

"I spend at least one day every week hiking in Silent Valley. Each time I go I find another site that I would like to take hikers into."

He's even written a 33-page guide to the property, which is accessed via the Silent Valley side trail from the trail head at the north end of the 2nd Concession, where there is limited parking available.

Three trails have been constructed on the property consisting of the main Bruce Trail on the top of the escarpment, the Wilson Homestead side trail, and the Avalanche side trail which explores the talus slope of the escarpment. It's an easy walk into the property, requiring only a few minutes to reach the most interesting areas. The main trail is more challenging, as is the Avalanche side trail.

One of his finds was both unexpected and startling.

"One day I came upon a huge pile of metal deep in the forest. You can imagine my excitement when I found the tail section of the aircraft that had crashed here in 1970." That crash saw the small plane, heading from Toronto to Griffith Island, shatter in flight during a severe storm. Four people died. Today, the tail section remains, along with other debris. It's marked by a plaque, and is found only a few minutes away from the remnants of the homestead.

"Since the trails have been opened hundreds of hikers have discovered the beauty and interesting sites of Silent Valley," Savage said.