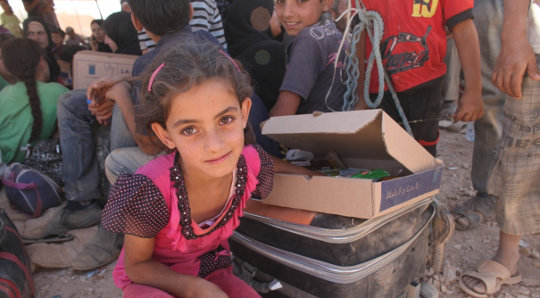 Meaford's Refugee Welcome Group has now confirmed that they have been assigned a Syrian refugee family who will live in Meaford once they reach Canada.

“We now know that a family of six will be coming to Meaford in the near future. The family consists of two parents and their four children, aged two to nine. The paperwork necessary for their admission into the refugee program is being processed, and we expect to hear very soon when we can expect to welcome them to our community,” said the Refugee Welcome Group.

The group made a presentation to Meaford's council in November to announce their initiative. Earlier this year council approved a resolution identifying Meaford as a “caring community where newcomers are warmly welcomed with the essential services, and the quality of life that sustains families and presents opportunities for successful resettlement,” and council encouraged “a collaborative grass roots effort working with our neighbouring community groups to assist with the settlement of refugees in our small town and rural communities.”

While the new Liberal government had promised to bring 25,000 Syrian refugees to Canada by the end of 2015, the initiative has been extended into the new year in order to allow for communities to prepare, and for logistical and security issues to be appropriately handled.

Under the terms of the Blended Visa Office-Referred (BVOR) program, the federal government will pay half the first year’s costs to support a refugee family. The other half is covered by the private groups sponsoring the family.

The Meaford Refugee Welcome Group launched a fundraising campaign to raise $25,000 to cover its share of these costs. Among the first community groups to offer funding for the initiative was the Meaford Rotary Club, who pledged to match 40 percent of the community contributions up to $5,000.

After announcing the formation of the group, and asking for help from the community to raise the necessary funds, the community has responded.

“More than fifty people from the community have reached out with offers of help of various kinds. This is a tremendous demonstration of support, and gives us great confidence that the family will be welcomed with open arms when they arrive,” said the group.

“The Group is doing well on raising the money we need to support the family for their first year here, although more funds are always a good thing! We have made arrangements for temporary housing when the family arrives, have organized a welcoming group, including a translator, and have many pledges for clothing, toys, and household goods. The local schools have expressed tremendous support and are looking forward to their new pupils. And we’re organizing the volunteers who will help the family adapt to their new life in Canada. We’ll be ready when they arrive!”

Meaford is not alone in their efforts to help find homes for Syrian refugee families, the group notes.

“Meaford is not the only community in Grey-Bruce looking forward to welcoming a family to Canada. We’re part of the Owen Sound & Community Refugee Initiative, a coalition of similar groups across Grey-Bruce. Between us, we’ll be welcoming at least ten families to our area. Amazing, and heart-warming!” offered the group.

To learn more about the Meaford Refugee Welcome Group you can visit their website at www.meafordrefugeewelcome.org.