Collisions Involving Deer on the Rise 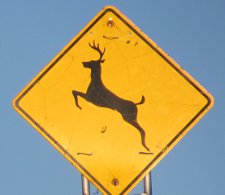 This past October, Grey County OPP investigated a total of 38 motor vehicle collisions involving deer and other wildlife.

Between November 1 and 8:00 a.m. November 18, Grey County OPP investigated 36 collisions involving deer alone, seven of which occurred in 24 hours. No injuries were reported.

In an effort to minimize the chances of being involved in a collision with deer, Grey County OPP offer the following tips:

Should you be involved in a collision with a deer, or any other animal, which results in personal injury to you or your passenger(s) and/or where the vehicle damage apparently exceeds $2,000, you must report the collision to police.