The intersection of Nelson and Sykes Streets was filled with hundreds of residents on Tuesday morning (November 11) for the annual observance of Remembrance Day.

A crowd of nearly 1,000 people gathered around Meaford's Cenotaph, many wearing bright red poppies, for the service which was led by Padre Helen Hume of the Branch 32 Meaford Legion, included representatives from veterans, the military, OPP, the Meaford Fire Department, and other emergency services personnel, as well as local politicians and service groups.

Hume spoke at length about the special significance of this year's Remembrance Day after two Canadian soldiers were killed on Canadian soil in recent months, both targeted by suspected terrorists. She told those gathered that Warrant Officer Patrice Vincent, and Corporal Nathan Cirillo were the first soldiers to have been killed on home soil since 1885.

Hume also spoke of those who arguably feel the greatest loss when a soldier doesn't return home – the children.

“My prayer today would be for all those children who pray that their dads, and moms in harms way come home,” she said noting that Cpl Cirillo's five year old son wouldn't have said such a prayer given that his father was home and presumably safe before being gunned down while standing guard at Ottawa's War Memorial, making the loss especially painful.

Wreaths were placed at the base of the Cenotaph by a range of service groups and dignitaries, as music played by the Georgian Bay Secondary School orchestra. 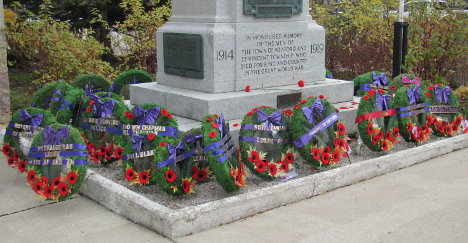