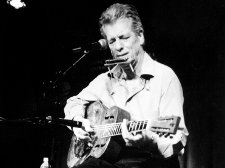 World class Blues music is coming to Collingwood, ON with the launch of the Blues Masters Series starting March 25 with Grammy Award-winning legend John Hammond.

Blues Masters Series offers a unique opportunity to see legendary talent up-close and personal in an intimate setting. The series features some of the all-time greats of the Blues and will draw the eyes of the music world to Collingwood.

In addition to winning a Grammy Award in 1985 for his performance on “Blues Explosion,” an album which features Stevie Ray Vaughn amongst others, John Hammond is a 2010 Grammy Nominee for “Rough & Tough” (Best Traditional Blues Album), his 33rd album since his 1962 self-titled debut, recorded live in November 2008 at St. Peter’s Episcopal Church in New York City; solo and acoustic.

John Hammond is considered to be of the top pedigree in Blues and has performed or recorded with Jimi Hendrix (who was discovered while playing in John’s band), Eric Clapton, Muddy Waters, Howlin’ Wolf, Duane Allman, Tom Waits, The Band, John Lee Hooker and many more. He remains one of the world’s premier acoustic blues artists.

Opening the show will be Canadian Blues legend Paul James. Paul is a Juno Award-winner who has shared the stage with Bob Dylan, Bo Diddley, plus many others, and in 2012 won a Maple Blues Lifetime Achievement Award.

Blues Masters Series will host some of the world’s premiere blues artists, starting March 25 2012 and will continue through the spring and summer of 2012. Other confirmed dates include: