As of January 1, Grey County Social Housing implemented a smoke-free policy in their residential units. The issue of second-hand smoke in multi-unit housing continues to grow as a serious public health concern. Currently, one in three Ontarians live in an apartment, condo or co-op where they can be exposed to unwanted smoke through shared walls, hallways or ventilation systems.

Meaford Community School has earned an honourable mention for their efforts in a province-wide waste reduction initiative that challenged students to reduce the amount of waste in their lunches.

Warm up With Thursday Flicks at Meaford Hall

If you’re looking for great entertainment and a way to stay warm this winter, Meaford Hall presents the Thursday Flicks movie series every other Thursday. Show times are at 4pm and 7pm and each movie is only $10. 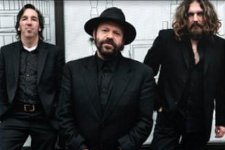 World Vision Canada is looking for volunteers for an upcoming Blackie & the Rodeo Kings concert at Meaford Hall on January 30.

Blackie and the Rodeo Kings is a Canadian folk rock/alternative country band with blues and country influences. The band was formed in 1996, in Hamilton, Ontario, by Tom Wilson, Stephen Fearing, and Colin Linden.