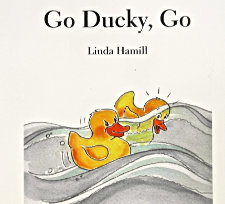 Linda Hamill is a local children’s author for ages 3 -11. She lives, and writes, just outside Meaford in Griersville.

All her books are illustrated, portraying various aspects of our community. You should recognize them all!

‘Scarecrow Invasion’ was released last year. Her other two books are being released this summer. ‘Go Ducky, Go’ is already available at the Meaford’s Farmer’s Market, and ‘My Strong, Sturdy Scarecrows’ will be there the beginning of August.

This year’s books will officially be launched at the Meaford Public Library on Fri, August 15 at 10:30 a.m.

Linda has always enjoyed writing. She was an English teacher and has taken several writing courses. Her mother was also a teacher and wrote in her journals everyday. The key to successful writing is to writing everyday!

Linda promotes reading to children as early as possible and encourages all ages to read.