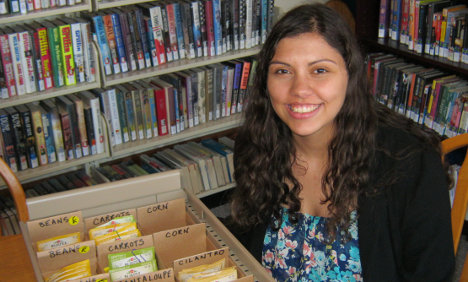 Meaford’s Seed Library was officially launched in Earth Week 2014, joining other municipalities big and small throughout Ontario in a growing movement which puts food sources in the hands of communities.

In Meaford, this effort complements the Community Gardens created by Transition Meaford and is operated out of the Meaford Public Library. The way it works is that visitors to the library can “check out” seeds from the collection to try their hand at growing something, anything, in one pot or in a large garden. The expectation is that when they harvest their vegetables, they preserve the seeds of a few plants and return them to the library for next year’s use. It’s hoped that the collection will grow and remain viable from the donation of any unused seeds local gardeners may have left after planting.

A long-term goal is that the Meaford Seed Library will offer rare, local and heirloom seed varieties that can thrive in our growing zone. A donation from Judy Monahan is the first step in that direction, with a packet of heritage seeds of Dutch lettuce that can be traced back to the 1700s.

These seeds were given to Judy by Lloyd Smith, specifically for our seed library. Originally from Cedar Grove, Ontario, Lloyd has a soft spot for Meaford after many years as a trucker delivering to the Stedman’s in town, and last summer performing his blues for audiences down at the harbour. He is a direct descendent of Christian Reesor, who immigrated with his wife Fanny to Canada from Pennsylvania in 1804, becoming one of the first families to settle in Markham township. They brought the progenitors of these seeds with them. The Anabaptist Mennonite family had been driven from their original home in Switzerland by religious persecution and eventually took advantage of William Penn's American settlement program, arriving in Philadelphia in 1739. Lloyd believes they may have brought the seeds of this Dutch lettuce with them across the ocean. He tells of how his father taught him to extract the seeds by letting them completely dry and then carefully blowing away the surrounding chaff, leaving the tiny seeds behind.

This is about more than the romance of history. Our seed library will preserve real food sources, grown locally, reviving ancient traditions against the backdrop of genetically modified seeds and monoculture that dominate modern agriculture.

Rural folks know the exquisite taste of the first-of-the-season toasted tomato sandwich or the sweet treat of peas from their gardens. This is a delight that urban folks in big cities and small municipalities want to experience. The Meaford Seed Library offers that possibility.