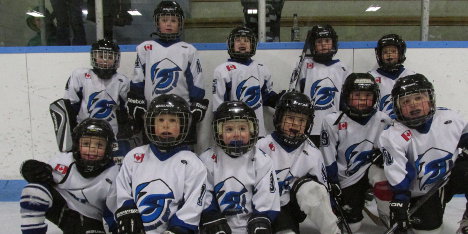 On February 22, 2014, the Georgian Shores Tyke 1 and 2 Teams hosted a one-day hockey tournament at the Thornbury Arena.

It was a great day for the Georgian Shores Tyke 1 team, as it gained valuable experience and enjoyed its first full day tournament.

Tyke 1 lost a hard first game to Wasaga Beach Saturday morning. They faced a tough Tyke squad and an amazing goalie. Despite a tight defense, Quinn Hawton outskated his defenders to score a nice goal with great speed. Jake Murray refused to give up and broke away with the puck many times against a great goalie before netting a beautiful goal late in the game. Drew Acres led the Tyke defence and won the MVP of Game #1.

The Georgian Shores Tykes played their hearts out in a very tight Game #2 against Newmarket. The lead changed many times but at the end of the game Georgian Shores lost a tough match 6-5. Both lines played hard and put up a strong defence and a speedy offence. Justin Acres led the team with a hat trick, assisted by Quinn Hawton and Luke Jack. Jake Murray and Quinn Hawton played a strong game, netting two more goals for the Tyke team. All of the Tyke players skated well and chased down a strong Newmarket team. The MVP of Game #2 was Liam McIntyre, who was strong in goal stopping many great shots and a few breakaways.

The team extended thanks to Coach Grant Murray for all of his time and hard work, as well as to trainer Jeremy Acres and Team Manager Jason Ritchie for their help behind the bench. A big thank-you was also sent out to Scott McIntyre and the Tyke parents for organizing and preparing the food for the day. Many local businesses generously donated prizes for a prize table fundraiser.