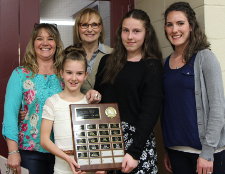 On Sunday, April 19, the Meaford Skating Club held its annual awards banquet at the Meaford Community Centre. A potluck meal was enjoyed by all, prior to the awards presentations.

This year the club had a very successful season passing 68 tests.

Awards were given out as follows:

Junior of the Year: Bethany Williamson

Intermediate of the Year: Tayah Davies

Senior of the Year: Emma Fulford

These awards were given based on most tests passed over the course of the season.

Canskater of the Year: Roman Darte

Coach’s Recognition Award: Emma Wright (given for best all around skater in academics and school sports and clubs)

Omni Award: Emma Wright (voted on by the skaters to honour an individual who is looked up to, with a positive attitude, helpful and sets a great example both on and off the ice)

Volunteer of the Year: Crystal Falls

Val Fisher Award: Deb Shaw (given to an exemplary volunteer with a passion for the club)

The skating club extended thanks to Jen Wright, Debbie Shaw and coaches Vanessa Hensel, Karen Verbrugge and Mary Hardie for organizing the event