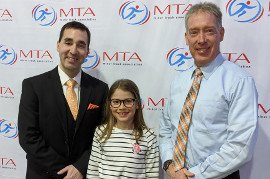 The annual MTA Rick Westwood Award of Excellence banquet was held in Mississauga on Saturday, February 29th to recognize the top performers of the Ontario Minor Track Association in 2019.

Numerous athletes brought home a trophy and a plaque for their efforts in a variety of events that included sprints, hurdles, jumps, throws and distance for the various age groups.

“An injury kept her from competing in the outdoor season, but returned for the Fall cross country season where she was rebuilding from the summer,” said Coach Kevin Hooper.  “2020 looks like a promising year for her as she has already won a gold and bronze medal at a competition earlier this indoor season.  Freja is a repeat winner as she won the same award in 2018 as a second year Mite.”