Pickleball a Hit in Meaford 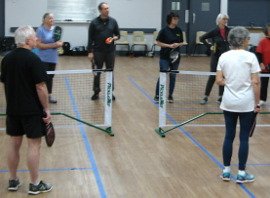 Pickleball is the fastest-growing recreational activity in many communities across North America, and Meaford is no exception. Beginning with the enthusiasm of organizer Brian Bell sixteen months ago to a membership of 75 and still growing, the recently formed Meaford Pickleball Club is riding the wave of this popular pastime.

Pickleball is a paddle sport combining aspects of tennis, badminton, and table tennis. It is played inside or out of doors on a court about half the size of a tennis court. The game was developed 60 years ago as an activity for children and has since evolved into a nationally recognized sport with local and regional tournaments and national championships.

One of the appeals of the game is its suitability for people of all ages and abilities. In our community the game is especially popular with retirees and seniors who perhaps played tennis, squash, badminton or other racket sports in their younger years and are now looking for an activity less demanding on their body. Skills acquired from other sports are readily transferred to pickleball and the game can be played at a pace suited to the participants.

When Brian Bell, an avid pickleball player, moved to Meaford he discovered there was no organized pickleball in town. His love of the game inspired him to offer his time and experience to the municipality's Recreation Department, and with the support of the staff introduced pickleball to the community in September 2018. The first session held at the community centre attracted six players. Participation grew to about 45 during the first year and with space for only two courts at the community centre additional facilities were sought. The Fitness Centre at the Military Base offered space in one of the gyms and during the summer pickleball was played at the tennis courts on Eliza Street.

Donna Lowe was one of the first people who signed up for pickleball. Donna had recently retired and was looking for activities and volunteer opportunities. This past September, when Brian Bell was forming the Meaford Pickleball Club, Donna volunteered to be on the executive team with several other keen players. The Municipality of Meaford made a financial commitment to assist the Club in purchasing equipment, and as more people signed up to play additional playing time was arranged at the community centre. Pickleball is now offered four days and evenings a week.

The success of many new initiatives is often due to the vision and efforts of one individual and the Meaford Pickleball Club is one example. Brian Bell said, “It is great to introduce pickleball to the community. I enjoy the coaching and instructing, and being retired I have the time to put into the organization. I enjoy seeing the first time players fall in love with the game.” Brian is quick to point out that pickleball is not just for seniors but an activity for children to grandparents.

Donna Lowe attributes the popularity of pickleball to several factors. “It is fun, enjoyable, social, and a good way to meet people,” said Donna. This is evident at the pickleball sessions at the community centre, with the hall filled with chatter, laughter, and words of encouragement amidst the sound of the paddles hitting the pickleball.