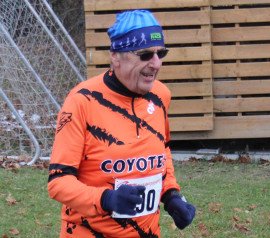 The 2019 Athletics Ontario was hosted at Seneca College in King City on Sunday, November 10th under overcast skies with temperatures hovering around 2'C.  Roughly 850 athletes arrived from across Ontario, with the Georgian Bay Coyotes sending five members to the competition.

The Masters 5km race began the day with Meaford's Dave Ellis starting things off with a bronze medal performance in the 70-74 men's age group.

“Dave is 71 years old and had not competed in a cross country race in over 50 years!” noted team coach Kevin Hooper. “He worked his way through the twisty, muddy and hilly course like he had been doing this for years.  He even climbed the "BEAST" hill, passing other competitors on the way.”

The BEAST is a 200m hill with a 60' incline, which was on the far end of the second lap.  Ellis sprinted up the final hill to the finish the 5km course in a very respectable time of 28:18, taking 85th spot of 93 competitors aging 30yrs and up.

Chantal Abbott, a 13 year old Collingwood student, was up next in the U14 Girls 2km trek.  Coming off a 9th place performance at the MTA Provincial XC Championships two weeks prior, she faced stronger competition at the AO Championships.  In the mass start of 92 girls, she had a sluggish start, sitting about 60th after the first 500m into the race.  She worked her way through the relatively narrow course and popped out of the trails in 23rd spot.  A final sprint up the final hill, she stopped the clock at 9:46 for a very solid performance.

Hailey Abbott, a 15 year old Collingwood student, laced up in the U16 Girls 4km race.  Hailey has had a very long racing season with her high school, stepping up to the line eight weeks in a row, where she placed 29th at the OFSAA XC Champs in Sudbury last weekend.  Facing most of the same girls as last weekend, she was determined to place better, and she did.  She stopped the clock in 19:03 to place 19th overall against 128 girls.  Team Quebec also competed in this race, with four Quebec runners ahead of Abbott.  Abbott was pleased with her performance and ended her XC season on a positive note.

Spencer Book, a 17 year old Meaford Student, and Ethan Pentland, a 16 year old Durham student, completed the racing for the Coyotes, both competing in the U18 Boys 6km race.  They had to climb the BEAST twice over the two 3km loops.  A fast start and a five runner wipe-out after the first 100m had Book leaping over the fallen competitors on a very muddy and slick first corner.  Pentland had avoided the incident with his good start near the front of the pack.  As the race went on, Book passed his team-mate and ran one of his best races of the season.  His time of 22:51 placed him 79th of 122 competitors.  Pentland struggled in the back half of the race, taking 107th overall with a time of 24:12.

“It was a good day of racing for all our Coyotes and the end of a very long season.  Congrats again to our veteran runner, Dave Ellis, with his bronze medal.  He is a true inspiration to ALL our Coyote members,” said Hooper.

The entire Coyote team is now on a two week break before resuming training on November 23rd for their winter season of indoor racing.  For more information about the team, visit their website at www.georgianbaycoyotes.com.

[Photo: 71yo Dave Ellis of Meaford competing in his first cross country race in over 50 years at the 2019 Athletics Ontario Cross Country Championships.  He placed 3rd in the 70-74 age group]