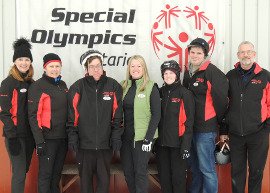 Local Special Olympic curlers are looking and feeling more like a team lately with their new team jackets courtesy of the Meaford Curling Club and the Lions Club of Clarksburg.

The jackets have made a huge impact on the young curlers, according to assistant curling coach Maureen Munden. Maureen is also the community co-coordinator of Thornbury/Meaford Special Olympics.

“Uniforms can make athletes feel more part of a team,” she said. “Knowing that clubs like the Meaford Curling and Lions Clubs have bought something just for them makes the athletes feel that they are worth something, and they take themselves more seriously.”

The special Olympics curling team is new, in its second year, and small in numbers. It competed in the provincial qualifier and in Sault Ste Marie in 2018 and won one game against the team that won the qualifier in the end.

The team is coached by Rob Munden who hopes to expand the team next year.

“The Meaford Curling Club donates ice time for the team’s weekly practices,” Maureen said. “The Thornbury/Meaford Special Olympics program is run by volunteers. If we had to pay for ice time, we probably couldn’t have a curling team.”