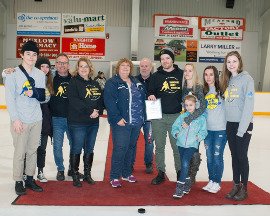 Mackenzie, a former Knights of Meaford player, started the annual charity tournament in 2015 in in memory of his grandparents, Anne and Alex Fleming, who were great hockey fans. His grandmother Anne passed away ten year ago from cancer.

A record number of teams signed up for this year’s tournament - 18 teams in all. The proceeds of the annual tournament have more than doubled each year, from $1,200 in the first year to $10,920 this year.

Proceeds of the entry fees, chili sales, bar, raffle tickets, and auctions have been donated to A Child's Voice Foundation (ACVF), in particular the foundation's Angel Hair for children that provides wigs for children undergoing treatment for cancer, alopecia, and other medical causes.

Over the past five years, the annual Hockey Hits Cancer tournament has raised upwards of $24,000. ACVF regional manager Susan Reid presented a plaque to Mackenzie on Saturday during the tournaments official puck drop ceremonies.

In January, $3,381 was raised during a Knights of Meaford Hockey charity game organized by Mackenzie when 25 team jerseys worn by the Knights were auctioned off at prices ranging from $50-250. Proceeds were donated to A Child’s Voice Foundation and its Angel Hair for Kids program.

Photo: Susan Reid (centre), the regional manager of A Child’s Voice Foundation (ACVF) presented a plaque to Mackenzie Fleming on Saturday, March 9, in recognition of Mackenzie’s work and dedication to the annual Hockey Hits Cancer tournament that Mackenzie, with the help of his parents, wife, siblings, extended family, and friends has given to raising funds for the foundation’s fight against cancer.