Skip's Choice Comes to a Close 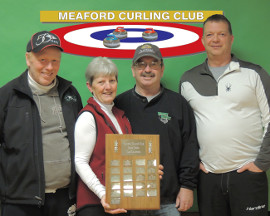 Leading the 16 teams after the round robin was the Wayne Foster team followed by the Steve Naylor team and the Dale Keaveney team. On Saturday March 19 the playoffs began with the top 6 teams in the "A" Event and eight teams in the "B" Event.

On Monday evening the top eight battled for the top four championship positions, while curling club members filled the club awaiting the outcome.

A good year was had by all. Now we look forward to next year.