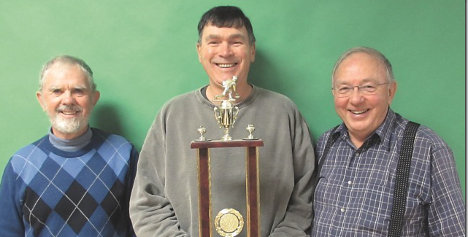 When the season opens, curlers are always a bit nervous for their first bonspiel of the season, not to mention being a bit rusty.

The first draw at this year's Men's Invitational was won by the Torben Hawksbridge rink whose team consisted of Lloyd Huss, Dennis Radbourne and Paul Smith.

However, the Dougherty team got into their stride and won the Senior Men’s Invitational Trophy which is sponsored by Richardson Boat Works by having the highest score of the day.

The team was led by Bryan Collins, at second was David Blackburn (not shown), Gary Chambers was vice and Murray Dougherty was skip. A great time was had by the fourteen teams who competed from Meaford, Chesley, Wiarton, Durham, Allenford, Owen Sound and Collingwood.