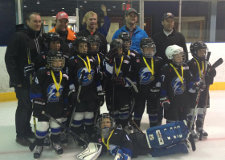 In their first game, the Lightning boys saw action against the Arran-Elderslie Ice Dogs. With some hard fought battles in the corners and perfect passing by all players, the Lightning earned a victory to begin the tournament.

Shallow Lake Lakers were the next opponent for the Lightning. This game was a fast-paced end to end battle with very few whistles. The Lightning earned a 6-1 win, placing them in the championship game Sunday afternoon.

After a good night's rest, the Georgian Shores Novice rep team was ready for battle against the South Muskoka Bears. Two evenly skilled teams took to the ice, with Georgian Shores having only nine skaters plus their goalie and the Bears a full energized bench of 14. This game saw Georgian Shores leap out with a 2-0 lead. The Bears battled back to tie and then take the lead 3-2. With four minutes left of the third period the Lightning evened up the score 3-3, sending this nail-biting affair to overtime, where the eventual winners were the Lightning, clinching the championship title.