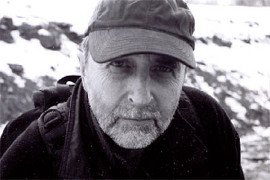 The event will be held on Thursday, March 19 at 6:30 pm at Meaford Hall. Smutylo will be discussing his most recent book, The Mongolian Chronicles: A Story of Eagles, Demons and Empires. Tickets are $10 per person and include coffee and a dessert.

For the past 40 years, Allen Smutylo has travelled to some of the world’s most remote locations, creating stunning artwork based on his experiences. He has won numerous awards for both his art and his publications. His first book Wild Places Wild Hearts won the Best Travel Adventure Book at the Banff Mountain Festival. The Memory of Water, his second book, was shortlisted for The Governor General’s Literary Award for Non-Fiction.

His recent book, The Mongolian Chronicles, describes the lives of Kazakh nomads as seen through the eyes of this artist, writer, and traveller, including the nomads’ unique hunting practices using Golden Eagles. This third book by Allen Smutylo was longlisted for the 2020 RBC Taylor Prize.

Autographed copies of the books will be available to purchase at the event on March 19.

Through its Koffee House Reads series each year, the Meaford Public Library introduces local writers to members of the community. There are a limited number of tickets for each event, so drop by the library to get yours today. The next Koffee House Reads even will feature Al McGregor on Wednesday, April 29 at 1:30 pm at To the Moon Café.

For more information about the Meaford Public Library’s Koffee House Reads and other events, call 519-538-1060 ext. 1123 or email: libraryinfo@meaford.ca.