FrontRunners: a Story of Survival, Hope & Reconciliation to be Presented at Meaford Hall 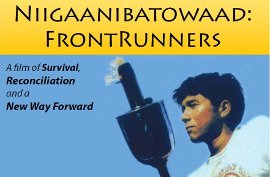 Imagine being bestowed the honour of running with the Pan American Games torch 800 kilometres and, while family and friends await your entrance into the stadium, you find yourself barred from entering. You are sent to a diner across the street, where you watch the opening ceremonies on TV. You watch as a non-Indigenous runner carries the torch the final few steps.

Two of the ten Indigenous runners who carried the Pan American Games torch to the Winnipeg stadium in 1967 will be in Meaford on Sunday, April 14, at Meaford Hall during a screening of Niigaanibatowaad: FrontRunners, a National Film Board (NFB) documentary based on a play written by local author Laura Robinson, at 7 p.m.

In 1967, ten outstanding young Indigenous athletes were chosen to run 800 kilometres over an ancient message route, carrying the Pan American Games torch from Minneapolis to a Winnipeg stadium. According to one of the organizers of the April 14 screening, Thomas Dean, “When the runners arrived at the stadium, they were not allowed to enter with the torch,“ he said. “Instead, a non-Indigenous runner was given that honour.”

Robinson was present during the 1999 PanAm Games when seven of the ten torch bearers from 1967 once again carried the torch, this time into the stadium, thus completing a journey begun 32 years earlier. Their story was the inspiration that she carried with her to Calgary, where she began to write Niigaanibatowaad: FrontRunner during her time as writer-in-residence at the University of Calgary in 2000.

Robinson knew she had the makings of a film. “I knew the story was good, better than Chariots of Fire, I felt, but it is difficult to raise money for films,” she said. “It took about four years. Eventually the cable television network APTN became a co-producer. The NFB took distribution rights in 2009, and became very involved in the film after the Truth and Reconciliation Commission Report was issued in 2015. The NFB did this because the film was cited in the report as an example of the way in which sport and art can build bridges for reconciliation.

“The Anglican, Presbyterian, and United Churches hired Indigenous educators to develop right relations study guides in 2009 when the film became distributed through the NFB.”

FrontRunners is a story of survival, hope, reconciliation, and a dream of a new beginning that transcends hatred, ignorance, and racism, according to Dean. “It is an opportunity to honour all ten runners, nine of whom were survivors of the residential school system,” he said.

To further honour the runners, a delegation will set out from the Neyaashiinigmiing community (Cape Croker) and run 83 kilometres to Meaford, arriving at approximately 3:30 - 4 p.m. Elders and chiefs from the Saugeen Ojibway Nation have been invited to attend. Writer and co-producer Laura Robinson will introduce the film.

“There is no charge to attend the film, but donations will be accepted,” said Dean.

“We ask that you consider this opportunity to learn, share, and support the dream,” Dean said “by participating in one or more of these ways:

“Donations received that exceed our costs will be directed to M’Wikwedong Native Cultural Resource Centre in Owen Sound, in support of their many vital Indigenous wellness and cultural programs.”