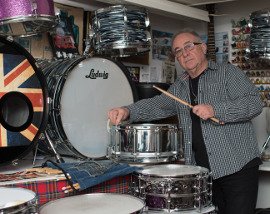 Billy Fairley has engaged local woodworker Jim McKendrick to redo the bearing edges on drums as part of the tuning service offered at Billy’s Meaford-based business, The Drum Factory.

Billy knows drums inside and out, both as a musician and as a craftsman. Early in his drumming career, he belonged to the Scottish band Merlin, that opened for The Rolling Stones in Glasgow in 1972. Shortly after, he was asked to play on the debut album for String Driven Thing, a Scottish cult band, and was asked to join the band as permanent drummer. The band opened for the Genesis Foxtrot Tour in the UK.

In 1980, Billy and his wife Anne Marie moved to Canada, where Billy continued to play and tour with the likes of the Nukes and The Irish Rovers. His love of music and technical skills lent themselves to the art of making drums, in particular the Irish-style bodran drum that he is proud to say he has crafted for big-name performers like Great Big Sea, Dolly Parton, The Irish Rovers, and Loreena McKennitt.

Drummers know the value of well-tuned drums, according to Billy. Bearing, the edge of the drum that the skins sit on, is critical to a well-tuned drum.

“Many drums come off the assembly line with improper bearing edges. Over time, wear and tear, poor handling, and storage can take their toll. Most experienced drummers know when they have a problem that can’t be quick-fixed with sponges and tape. Typically, they will go to music store and ask for the name of a drum tech.”

Billy can repair a drum’s hardware, replace the wrap, and tune it from his home in Meaford. However, sewing machines and sawdust don’t mix so he has engaged cabinet and furniture maker and jointer Jim McKendrick to redo the bearing that is an integral part of tuning drums.

Jim operates Timeless Woodwork from his workshop in Slabtown, south of Thornbury.

The process of redoing drum bearing includes visually checking for flatness on a cast iron surface or sheet of thick glass, truing the edge, checking and correcting the outside edge (round over) and the inside edge (chamfer).

For more information about The Drum Factory, contact Billy Fairley at 519-538-4170. The Timeless Woodwork website address is www.timelessworkwork.com.